Lawrence Field Day Fest begins on Thursday, and there are PLENTY of acts being featured this weekend. Wanting to go but don’t recognize a few names? Having a hard time creating a schedule of where to go and when? KJHK has you covered.

From Monday through Thursday, KJHK will be releasing a preview guide for every night of LFDF. We will give you the breakdown of who will be featured at The Bottleneck, Replay Lounge, The Jackpot, and the Eighth Street Taproom.

Today’s guide will preview the four venues for Thursday night. Check back in tomorrow for a preview of Friday night. 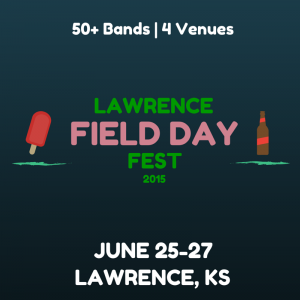 The Ovaries-eez (10PM)
The Ovaries-eez are an ethereal folk trio consisting of three women, Johni Lacroe, Amber Hansen and Monica George. Their first EP, Snow Daze, was released last July to much fanfare featuring their trademark harmonies and minimalist aesthetic. Check out their Live @ KJHK in-studio performance for a small sample of what their live show entails. 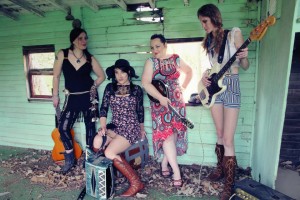 Sugar Britches (11PM)
Sugar Britches are four piece bluegrass group known for their harmonies
and boogie-woogie style instrumentation. These ladies are sure to have a good time wherever they play. If you’re a fan of countrified blues with just a hint of sass, this band will be right up your alley. Photo Link. 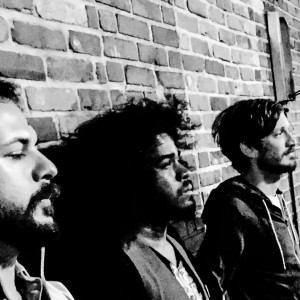 Various Blonde are a Kansas City project led by guitarist and vocalist Joshua Allen. Various Blonde describe themselves as experimental music and have influences as diverse as King Crimson and Iggy Pop and the Stooges. Various Blonde were one of the top sixteen bands for Farmer’s Ball this year, so if you were disappointed that you didn’t get to see them in the top eight now is your chance to see them live. Photo Link. 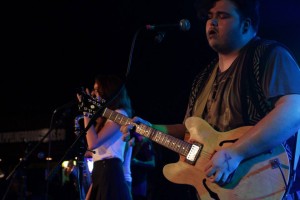 Paper Buffalo are a six-piece math rock outfit hailing from right here in Lawrence, Kansas. This ragtag bunch is fronted by music scene veteran Jon Fitzgerald and have been making a name for themselves as of late. Their debut EP, White on White, was released this year and has been getting praise from their many fans. With two Live @ KJHK sessions and a 2014 Farmer’s Ball semifinalist placing under their belt, there’s no stopping this group.

Voyager is a brand new band, shrouded in mystery. Voyager will be performing their first live show at LFDF. Band members include local music scene veterans, John Huff and JP Redmon. According to Jason Meier, LFDF organizer:  “I’ve been told by John it’s a heavy psychedelic stoner metal thing they are going for. Basically a REALLY tripped out Black Sabbath is what it sounded like to me. That’s all I got.” 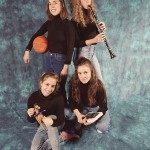 Chastity Belt (9 PM)
Chastity Belt is a Seattle-based band that formed in 2010. Their debut album, No Regerts, came out in 2013 to critical praise. They recently released their new album, Time to Go Home, in March. They will be touring throughout all of June.

Jorge Arana Trio (10 PM)
Jorge Arana Trio formed during 2011 in the heart of Kansas City. This avant-rock group will rock your mind with tracks from their most recent EP, Oso. The albums surfy vibes and good times are sure to leave you wanting more. 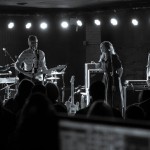 Spencer Mackenzie Brown’s indie folk-rock band is going to be a great closing act for the night. They have recently performed at Middle of the Map Fest, Boulevardia and Swan Arts Fest. Spencer’s most recent EP, Part One, was released in July 2014. Photo Link. 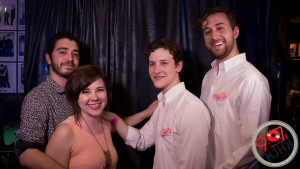 Now that is a beautiful band picture.

Toughies (7 PM)
Recently formed band, Toughies, have been making waves in the local scene. Their first show was only mere months
ago and since then they have become a Lawrence staple. Toughies are an indie pop rock band with members from Haunt Anata and Panda Circus. They were Farmers’ Ball finalists during the 2015 competition. Check out their Panda House Live demos on Soundcloud.

Bonzo Madrid (8 PM)
Bonzo Madrid is the solo project of CJ Calhoun of Cowboy Indian Bear. He produces and explores interesting sounds through his use of layering and synths. Creating atmospheric builds is something Bonzo Madrid masters well. 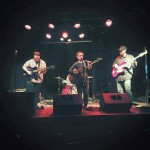 The Clementines are a Kansas City four piece Americana group. The lead, Nicole Springer, sings out well written and emotionally driven vocals that have received quite the attention. The Clementines are known for entertaining audiences all around and have won three local awards for their achievements in music. Photo Link. 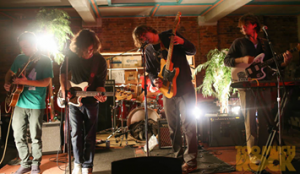 Rev Gusto (10 PM)
Rev Gusto is a garage pop Kansas City staple. They have made quite a name for themselves locally with their catchy and ever so enjoyable sound. Along with their well crafted tunes, they seem to have great personalities to match. Their first full length album is set to release July 28th. Check out their dope Live @ KJHK performance from last year. Photo Link. 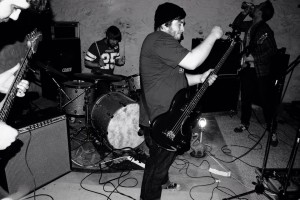 SeaKings is a four piece band, with punk roots, that reside in KC. They recently toured with Emo Side Project across America to promote their new album, Dregs. The entire album is based around a concept of cities that no longer exist. Their recent Live @ KJHK session was great. This is a fun band to see live, in any venue. Photo Link. 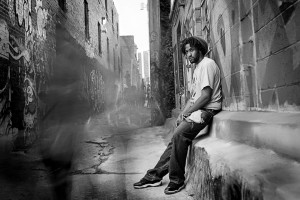 Domineko // Le$ Paul (12 AM – 1:30 AM)
Domineko is a Kansas City based artist whose entire life has been based around music. His LP, Wood Floors, is extremely moving and complex. He will be teaming with Le$ Paul, an Emcee who also hails from KC.Paul recently performed at SXSW with Tef Poe, GLC, and Jeru the Damaja. He is currently working on releasing a new album, Jive Turkey. Photo Link of Domineko. 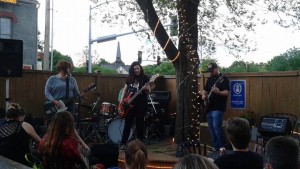 Vedettes are a fresh crew straight out of 2015. They are moving up quickly, even opening for Black Joe Lewis for Free State Fest. They have also recently played with The Quivers and Sounds del Mar. Check out their Basement Magic demo on Soundcloud. Photo Link. 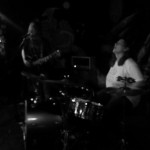 Mr. and the Mrs. (10 PM)
This garage punk duo has been blowing our minds for awhile now, and LFDF is their next stop. Hailing from Hillside, KS, Mr. and Mrs. recently released a superb music video for the single, Brain Surgery. You can find more great material on their Soundcloud profile. 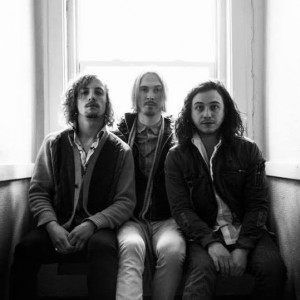 Not A Planet (11 PM)
Not a Planet has been a KC staple for years. This rock trio’s first LP, The Few, The Proud, The Strange, must be listened to if you are not familiar with their work. They have recently played at Boulevardia, and are ready to blow some minds at the Taproom. 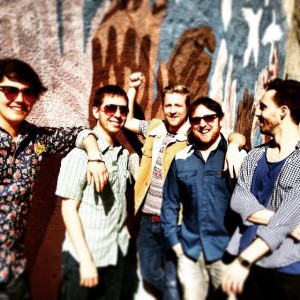 Pink Royal (12 AM)
This 5 piece, groove-pop rock act recently released their first LP, Taps, to great acclaim. They have been working hard this summer promoting their new material. This night at the Taproom will be a great opportunity to delve even deeper into their material. Pink Royal is incredibly electrifying, and will be a great act to close your night on. Photo Link.

-These posts were created in unison by KJHK writers Rachel Bennett, Quinton Cheney, Mason Kilpatrick, and Jake Waters. Huge thanks to all of those who helped contribute to the post.