If anyone knows the mountain of work ahead of first year Head Coach David Beaty right now it’s Justin Fuente.

In 2012, Fuente took over a Memphis Tigers team that was arguably in worse shape than the squad Beaty inherited this past Spring. Fuente was given a team with only 50 scholarship players that had gone 5-31 over the previous three seasons and returned only 3 offensive starters. Sound familiar?

But, if anyone knows how fast a program can transition from laughing stock to conference champion, it’s Justin Fuente.

After just three years of coaching the program, Fuente had completely turned the team around and guided them to a 10-3 record, an American Athletic Conference Championship, and a 55-48 Miami Beach Bowl win over BYU. Memphis finished the season ranked 25th nationally and reached double digit wins for the first time since 1938.

So on Saturday when the Jayhawks take on the Memphis Tigers in Memorial Stadium, Fuente will see a team awfully similar to the one he started with during his first year as head coach. Beaty, on the other hand, will be standing across from an example that even the most monumental of rebuilding projects can end in success. 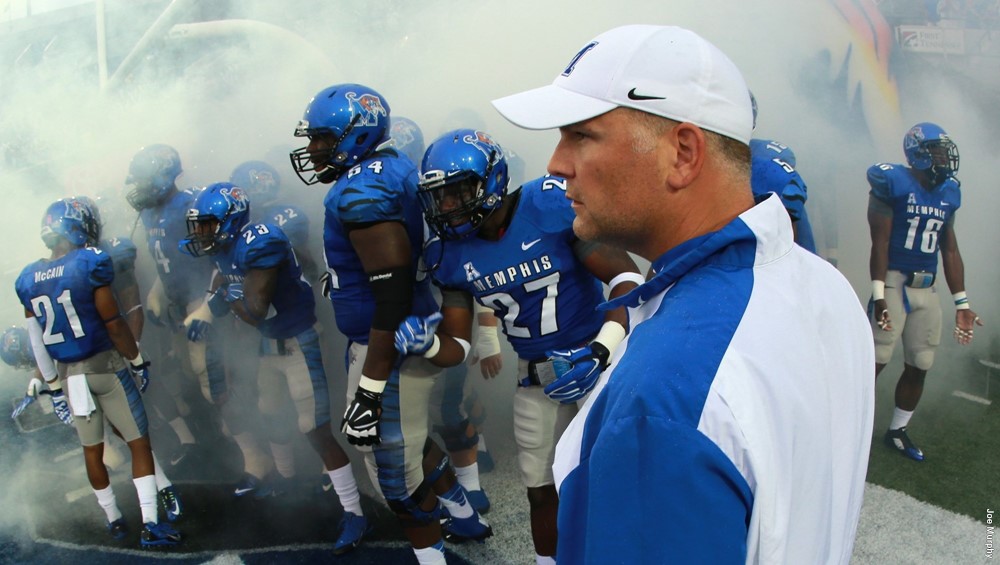 Memphis Head Coach Justin Fuente with his team prior to heading out on to the field. (Photo by Joe Murphy)

Memphis is coming off its best season in years. Expectations were set very low after they finished 3-9 in 2013 and many expected them to finish in a similar spot in 2014. Instead, they won their first conference championship since 1971 and had one of the best seasons in the program’s 103 year history.

The Tigers collected numerous postseason awards, including AAC Coach of the Year (Justin Fuente), AAC Defensive Player of the Year (Tank Jakes), and AAC Special Teams Player of the Year (Jake Elliot). Memphis also had 10 players selected to the AAC All-Conference teams. Unfortunately for the Tigers six of those players graduated last season, including linebacker Tank Jakes who led the team with 92 tackles, 6 sacks, and 4 forced fumbles.

Memphis has established an identity of being a very dangerous team offensively and likes to punish opponents on the ground with multiple running backs. They led the American Athletic Conference in rushing last season with 190.5 yards per game without a single running back averaging more than 80 yards rushing per contest. Last week the team ran for 317 yards against Missouri State and had three different players eclipse 70 yards rushing.

The Tigers can also make you pay in the air. Returning starting quarterback Paxton Lynch is a duel-threat weapon that can make big passes down the field or keep it himself and torch defenses for easy yards. Memphis also brings back four of their top five receivers that helped the team average 236.6 yards receiving per game.

Memphis is stout on the defensive end as well, allowing only one team to score more than 28 points last season while allowing opponents 349.5 yards per game. Last week, in their season opener, Memphis held Missouri State to only 125 total yards and 7 points. However, the Tigers defense will have to overcome the losses of First Team All-AAC selections LB Tank Jakes, defensive end Martin Ifedi and cornerback Bobby McCain to keep better opponents from scoring.

Paxton Lynch is returning from a sophomore campaign in which he had 3,031 yards passing, 321 yards rushing, and 35 total touchdowns (22 passing, 13 rushing). He can hurt secondaries with the deep ball or tuck it in and burn defenses on the run. He’s a great dual-threat weapon and could cause this game to get out of hand if the Jayhawks secondary can’t contain the Tigers’ receivers.

His size creates another disadvantage for KU. The Jayhawks aren’t going to be swatting passes down at the line so it will be up to Ben Goodman and company to create pressure around the edge and get in Lynch’s face to disrupt his passing. If the defensive line struggles to put pressure on the QB, Lynch could have a career day against an inexperienced secondary. 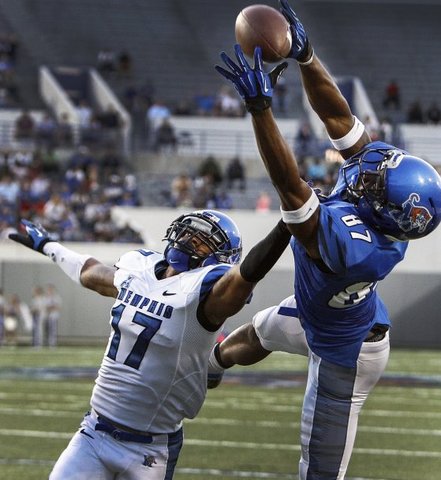 Jayhawk fans witnessed last week what can happen when a tall wide receiver matches up against the Jayhawks’ secondary. South Dakota State wide receiver Jake Wieneke lit KU up for eight catches, 160 yards and two touchdowns. Memphis WR Tevin Jones has the potential to do the same thing.

Jones offers a similar height advantage over the KU secondary and could use it to his benefit if KU doesn’t cover him well enough. It’ll be up to Defensive Coordinator and Safeties Coach Clint Bowen and Cornerbacks Coach Kenny Perry to have their secondary prepared for another game against taller wide receivers.

Craft and Cooper were two crucial parts to Memphis’ three headed run game last year that led the AAC in rushing. This year they return and look to continue their success on the ground. Last week, against Missouri State, the two combined for 174 yards rushing and two touchdowns. Along with newcomer Jamarius Henderson, it seems that the three headed run monster is back for Memphis and should lead them to the top of AAC rushing once again.

Considered one of the best place kickers in all of collegiate football, Jake Elliot will be a crucial component if this game comes down to the wire. Elliot was nearly perfect within 39 yards (15-16) and has a powerful leg capable of hitting 50+ yard field goals. Last year he saved the game for Memphis by nailing a 55 yard field goal against BYU in the Miami Beach Bowl to send it to double overtime and allow Memphis to score the game winning touchdown. If the Jayhawks are able to keep this game close, Elliot could prove to be the deciding factor. 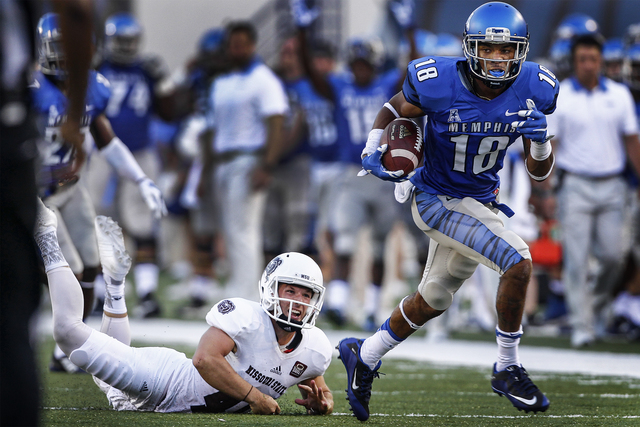 Roderick Proctor had only one punt return last year, but with last year’s returner Keiwone Malone graduated, the position was given to Proctor for last week’s game against Missouri State and he certainly made an impression.

Proctor showed how dangerous he could be as the return man after achieving the Tigers’ first punt return touchdown since 2004. The speedster averaged 28 yards per return last week so it’ll be up to the Jayhawks special teams to keep him from giving Memphis great field position.

Wave The Wheat If…

KU forces some turnovers. Last week against South Dakota State the Jayhawks were unable to force a single turnover while giving up two big ones. That won’t be good enough to stay competitive against higher quality teams. The defense will need to make some big plays and get the ball back for their offense if it looks to stay in close games this season. If the Jayhawks can get the turnover margin in their favor and put some pressure on the Memphis offense, look for KU to make this a very close game.

Plough The Field If…

KU’s secondary goes back to being “first half of South Dakota State” secondary. Before the halftime adjustment made by Clint Bowen, the Jayhawk secondary was getting handled by Zach Lujan and the Jackrabbit offense. The Jackrabbits used their size advantage on the outside to throw for three consecutive touchdowns in the first half. Paxton Lynch has the ability and the receivers to easily take advantage of the undersized secondary if KU plays the way they did in the first half against SDSU.

KU will remain competitive in this one but the undersized secondary hurts again and the talent of Paxton Lynch is too much for the Jayhawks to overcome.