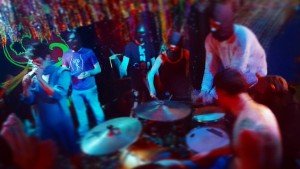 You would think the time-tech-toting tuff guys of Arc Flash would have little trouble setting a course for Saturday night at 8. Then again, these hyper-kinetic hipsters are not exactly known for their ability to follow instructions. However, I wasn’t about to let their elusive nature prevent me from talking to these earls of ear candy.

Keeping my listeners up to date on the goings-on of the local music scene is critical to the success of Plow The Fields, after all. Fortunately, local music is in my blood. Using my powers of divination, I was able to predict the most likely place to intercept Mark and James: the infamous Replay Lounge.

My prediction was correct, and shortly after my arrival they returned to pick up several pieces of gear which they had left on stage after playing there the night before. Although tracking them down was a titanic chore, it was totally worth it. So kick up your feet and sink into your seat as I pry into the past, present, and future of the experimental space punks known as Arc Flash.