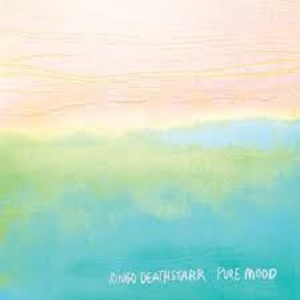 Ringo Deathstarr, as the name might imply, is a band with a divided spirit. Equal parts indie-chill and stoner riff-rock, Ringo brings together a lot of elements that, for the most part, work well. Tracks like “Stare at the Sun” explode into dystopian house overtones reminiscent of English trip-hop band Archive. “Show Me the Truth of Your Love” wavers on post-rock airwaves while dipping into moody walls of sound like a foot in cold water.

The album title, Pure Mood, is perhaps a nod to how mixed and decidedly impure the album’s influences cross over one another. Tracks like “Guilt” feel like a nod to the cleanly layered preferred tracks of Rock Band aficionados while lyrically poking fun at those tendencies (see “Big Bopper” which specifically calls out Husker Du and Pearl Jam’s “Even Flow” while clearly paying homage to both).

The upside of Ringo Deathstarr’s struggle for identity is that there is something for everyone on this album. Looking to ride the wave out as you bliss your way to the next electronica track? Check out “California Car Collection.” Want something to tear the edge off? Rip the blister with “Acid Tongue.”

Pure Mood does tend to suffer under its own ambition. Past track seven the album begins to feel a bit tired and forced. We get it, Sgt. Pepper’s Lonely Hearts Club was a thing, but merely attaching weird outro bits onto songs does not undue the previous four minutes of much the same. This is their fourth album and so the band may be suffering from touring and creative fatigue.

Recommended If You Like: The Notwist, the more chill end of Boris, Archive, Fugazi, The Cure