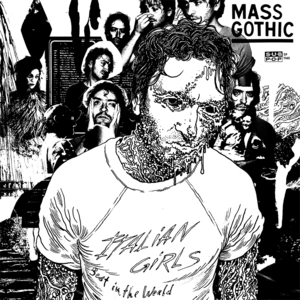 It is difficult to be an innovative artist these days. That could be said about any era of music, but it has particular relation to the manner which so many contemporary groups have now approached music with a multi-genre and incredibly layered approach to creating unique listening experiences. Mass Gothic, hailing from New York, was a project born of creative frustration and sees a previously exhausted artist exploring the aforementioned territories in rejuvenating ways. Fronted and conceived of by Hooray for Earth’s Noel Heroux, we are treated to the very thing that makes artistic rebirth so impressionistic. Here, a veteran of the scene shows us just how nuanced the overdone tropes of synth-pop can become, especially when combined with minor progressions and honest lyricism. This one does not just hit home aurally, it reminds us of the vitality that comes with an artist who cares about their craft.

This self-titled debut is a medium length album with songs that stick around just long enough to make you yearn for more. Its initial onset in “Mind is Probably” tricks us into thinking that it’s going to be a fairly standard affair of synthy art rock, but the more one listens, the more one latches on. This adventure is a foray into the mind of an artist who is ready to shake things up all whilst refusing to abandon the things that make this kind of record appealing to just about anyone. While some may find it overly dark and self-indulgent, many will be pleasantly surprised by its simplicity and dedication to the consistency of its surprises. “Nice Night” is suddenly driven by a doom metal riff which would feel out of place on a traditional synth-pop record, but somehow it works really well because of the textural aesthetic that is carried throughout the entirety of this release. “Abyssal” by Chelsea Wolfe comes to mind in that regard. This is not all to say that the effort deserves unbridled praise. The faults of the record are, too, in line with its dedication to consistency. Eventually, the surprises run dry and the listener is left wondering whether or not the album closed out with tracks that were a bit of an afterthought. In this way, the conclusion of the release feels a little complacent, but that is okay considering that the rest of it is so intriguing.

Mass Gothic certainly not a perfect album, but we rarely expect that to happen. Perfect albums happen to us without warning. Mass Gothic deliver what seems to be a rather fascinating attempt at melding soundscapes that are not often combined, and this particularly integrated aesthetic is surely its driving force. It is easy to see how something like this will make its way into the public sphere, with many anticipating a second and more mature release from Noel and his new artistic vision.

Recommended If You Like: Hooray for Earth, Massive Attack, Chelsea Wolfe