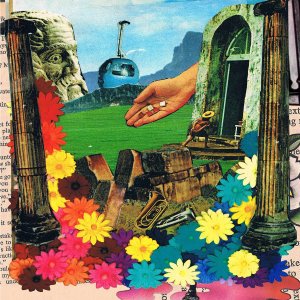 Hailing from Highland Park, this quartet has released their debut album. Levitation Room does what a lot of other bands have done in the past 15 years by revisiting ’60s-psychedelia, however, there is a fine production value to each track that easily makes it worth the while.

Though this is by no means a bad album, it is quite a bit easier to delineate what is wrong with it before sitting back and taking in the entirety of the album. The most obvious fault to Ethos is that the songs all sound fairly similar. There isn’t a whole lot of differentiation in instrumentation nor in song structure. The guitar lead-ins generally dissemble into echoing jangles, vocal chimes, and a complaining bass that constantly sounds like its climbling a hill of sound. All of this is pasted over rhythmic drum breaks that at its worst appear to be filler.

Now that I’ve pinpointed the issues, the truth is that as far as rehashed psychedelia goes, this is a stand-out album. There is quite a lot to love about it from the excellent guitar riffs to the relative pensiveness that is captured in the lyrics. On top of this, the tone of each song is very well managed. There is an incredibly high amount of production value within this release and that should also be championed.

At worst, this album is boring, and at its best it is perfect for spacing out. There is a fair amount that can be said about tackling such a heavily used genre with a limited sound like psychedelia. Finally, as this is their debut, there is a good amount of room for this band to grow and as they’ve successfully used the genre, it will be interesting to see where they turn next.

Recommended If You Like: The Black Angels, MGMT, Kuroma
Recommended Tracks: 2(Cosmic Flower), 4(Lazy Lawrence), 10(Crystal Ball)
Do Not Play: None
Written by Dylan Fox on 07/05/2016