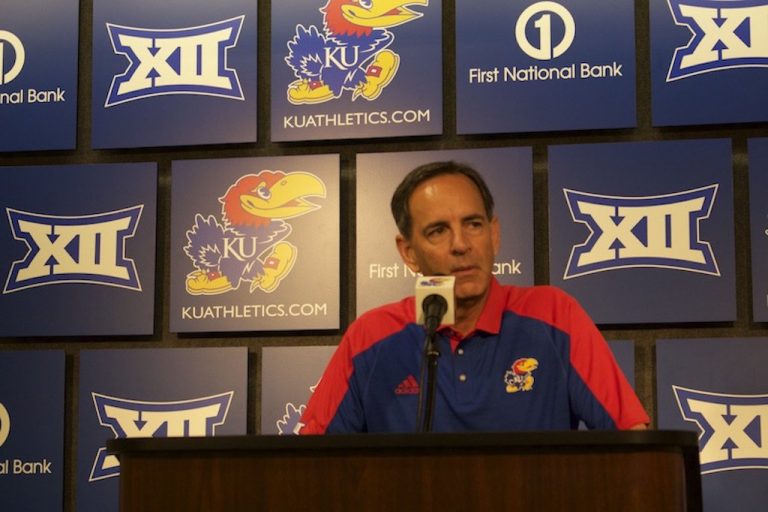 The Time for Fall Sports is Here

LAWRENCE, KANSAS – With the start of Kansas volleyball, soccer, and cross-country right around the corner, coaches from their respective squads addressed the media on Tuesday at Allen Fieldhouse.

Head volleyball coach Ray Bechard kicked things off, and explained that things are a little bit different now after the team’s first ever trip to the Final Four in 2015.

“Programs view us differently now.” Bechard further explained this sentiment when he mentioned that he talked to folks from Southeastern Louisiana, whom the Jayhawks are playing on September 17th.

The Lions told Bechard how excited they are for the chance to play against the 30 win team from last year that is returning 5 starters in the Jayhawks. These 5 starters are Cassie Wait, Kelsie Payne, Tayler Soucie, Ainise Havili, and Madison Rigdon.

While the volleyball team is returning a large portion of their team from last year, they did lose outgoing senior Tiana Dockery, who many considered to be their senior leader from last year.

However, Bechard brought up Sr. Maggie Anderson as a person who is taking on a leadership role this year with the team. Anderson played in every single game in 2015, starting once. The Jayhawks are ranked 5th in the nation going into 2016.

Next, head soccer coach Mark Francis took the podium to talk about his team who also achieved a first in program history last season.

The soccer team advanced to their first ever Big 12 Championship Game in 2015, before falling at the hands of Texas Tech.

Francis acknowledged that while he was excited about getting that far, he was disappointed in the final result. “We want to make it one step further.”

The soccer team is returning 8 starters from 2015, but have notably lost outgoing senior Liana Salazar. Salazar was the leading goal scorer (7) and the leading assister (4) on last year’s squad. Coach Francis noted that it will have to be a collective effort in order to replace such strong production, as nobody returning had more than 2 goals a year ago.

Even with the loss of Salazar, Francis is still very happy with where his team stands, despite the low preseason Big 12 ranking for his Jayhawks. “We’re really excited that we got picked 7th. This team is way better than that.”

Whittlesey appeared to be especially excited about the women, mentioning that the women’s team is returning many of the same faces from last year’s NCAA Tournament team, including star sophomore Sharon Lokedi.

“You need that type of competitive drive. She always finds a way to raise it.”

Whittlesey finished by saying that the team as a whole appears to be exhibiting no selfishness, just as was the case in 2015.