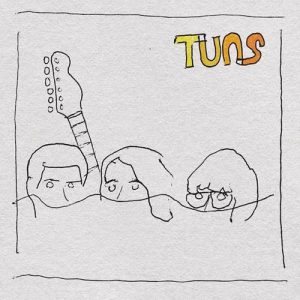 Tuns is a three-person indie rock band hailing from Canada. The band is comprised of Chris Murphy of Sloan, Matt Murphy of Super Friendz and Flashing Lights, and Mike O’Niell of the Inbreds. Tuns is new to the scene, just forming in 2015, and releasing their debut single “Throw It All Away” in the same year. The band released their self titled album in late August of this year, making it their first full-length release. Tuns features garage band instrumentals along with Beatles-esque voices to create an enjoyable indie rock album.
Tuns is a talented new band with pop melodies, rock’n’roll sound, and well written lyrics. The music created reflects this band is full of talented, experienced musicians, with fresh ideas and a passion to perform. These guys have made an album that explodes with diverse upbeat intricate melodies, with a clean well produced sound. Their self-titled album features the single “Mind Over Matter” with a boyish Beatles sound that echoes feelings of the summertime. Other stand out singles are “Back Among Friends”, “Lonely Life”, and “Mind Your Manners” that each have their own sound. The album ends with “I Can’t Wait Forever”, a slow tune with a psychedelic vibe and a fitting ending to an overall feel-good indie rock album. The album as a is a short fifty minutes. Tuns keeps each track short, packing a sweet punch of pop rock, making it an easy and enjoyable listen.

The band is currently on tour in Canada until the end of November, 2016.

Recommended If You Like: Wilco, Tame Impala, Young The Giant
Recommended Tracks: Mind Over Matter, Mind Your Manners, I Can’t Wait Forever
Do Not Play: none
Written by Maggie Witherow on 10/05/2016