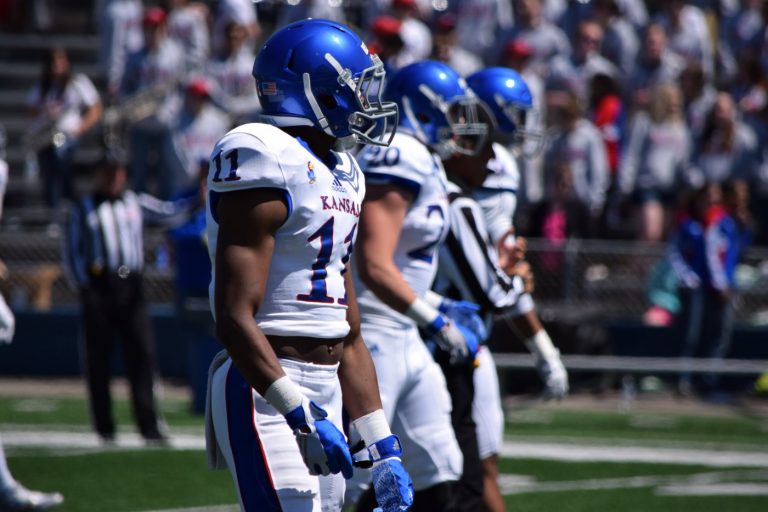 The Kansas Jayhawks hoped a strong showing against TCU last week would give the team momentum as they entered a tough stretch of Big 12 games. Baylor dashed those hopes early and often in route to a 49-7 win, the 38th straight road loss for the Jayhawks.

Baylor (6-0, 3-0 Big 12) allowed their starters to take a seat after the first half, as senior quarterback Seth Russell and running back Shock Linwood built up a 42-0 lead. Russell finished with 190 total yards and three touchdowns. Linwood chipped in 46 of the team’s 140 first half rushing yards.

Sophomore quarterback Ryan Willis’ day also ended shortly after halftime, as he finished with 89 yards on 10-19 passing with three interceptions. Willis was relieved by redshirt freshman Carter Stanley, who continued KU’s quarterback woes with a 2-6 passing clip, throwing for 39 yards and an interception.

The Jayhawks were driving into Baylor territory on their first possession before Willis threw a pick-six to Ryan Reid to put the Bears up 14-0. After one three-and-out, Russell did some more damage on the ground as he scampered for a 26-yard rushing touchdown.

The Jayhawks scored on Stanley’s first drive in the third quarter after sophomore receiver Steven Sims, Jr. broke into the open field for a 34 yard gain, setting up an eventual Khalil Herbert two yard touchdown rush.

The remainder of the game was sloppy from both sides, as the Bears played their second and third string lineups. The Jayhawks were still unable get the offense on track, finishing the game with 217 yards.

KU: The Jayhawks ran as many times as the Bears, but were far less productive. KU had 48 rushing attempts to Baylor’s 49, but the Jayhawks gained only 83 yards. The 1.7 yard average of the Jayhawks keeps the pressure on Willis, which he buckled under, as he committed his seventh turnover in the last two weeks.

BU: Do you know the game where you close your eyes and point to anywhere on a map, in this case the box score, to decide where to go? The Bears won in all facets of the game, minus their kicking performance. Chris Callahan shanked two attempts from 34 and 36 yards before backup Drew Galitz came in to miss a 48-yard attempt. So there’s that.

KU: Willis needed one more quality start to fully gain the trust of his coach, his teammates, and the KU fans as the concrete QB1. All the confidence built up in the TCU game eroded away as the sophomore signal-caller looked overwhelmed by the Bears defense. KU did not necessarily need the game to be competitive, but they needed to see a quarterback hang tough for two complete games.

Baylor: A team stained with off-the-field controversy has stayed the course to remain a contender for the Big 12 championship, and possibly the College Football Playoff. For the latter, the Bears couldn’t have back-to-back subpar games against the likes of Iowa State and Kansas. Baylor sent a message with their dominant win.

The Jayhawks will host the Oklahoma State Cowboys (4-2, 2-1 Big 12) at Memorial Stadium next Saturday at 11 AM. This will be the second week in a row the Jayhawks will face a team coming off a tight win over Iowa State heading into a bye week. The Cowboys beat the Cyclones 38-31 in Stillwater. OSU has averaged 40.7 points per game behind the arm of senior quarterback Mason Rudolph, who has thrown for 2039 yards with 13 touchdowns and two interceptions.