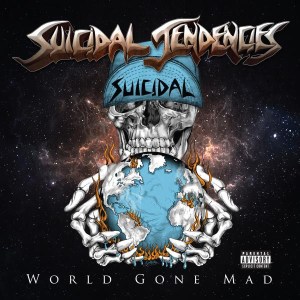 Suicidal Tendencies are a household name in the early punk to thrash crossover phenomenon. They were at the head of a movement that sparked new sounds, textures and ultimately, a vital form of genre development that would expand into multiple territories in the metal and punk scenes alike. On World Gone Mad, we hear a band as fervent and relevant as they’ve ever been, even if their sound has been set in stone for over 20 years. This time, they’ve also brought Dave Lombardo of Slayer on board, which certainly contributes to what makes the album so enjoyable.

World Gone Mad is one of their most well-produced and musically intricate releases to date. The arrival of a new album from Suicidal Tendencies keeps their music hitting hard and making itself known in what has become one of music’s most extreme genres. In that regard, it’s quite impressive that they’ve still got fresh ideas to offer. As always the bass, guitar and drum work are impeccable displays of musicianship. In fact, some of their riffs and ideas feel like an extrapolation of some of the more technical thrash acts that have arrived on the scene in the last ten years or so. Moments on this record make you wonder if the guys are aware of fellow chaos-makers in groups like Revocation, Vektor or even some proggier counterparts like Haken.

Though a tad overlong, the record is one of the most fun releases to come out in 2016, and it achieves that status without sacrificing a broad appeal to music nerds, longtime fans of the band and newcomers to metal altogether. It’s an incredible time we live in for music, and even a band nearing 40 years of existence continue to impress as Venice’s longstanding hometown heroes in thrash and punk.

Recommended If You Like: Municipal Waste, S.O.D., Carnivore, Revocation
Recommended Tracks: The New Degeneration, Damage Control, Happy Never After
Do Not Play: 3, 4, 9, 10, 11
Written by Connor Janzen on 10/13/2016