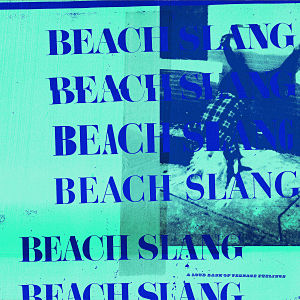 Beach Slang is one of those bands that nostalgically and dearly holds onto the sometimes-conflicting emotions and ideals associated with youth: freedom and desperation, recklessness and safety, passion and indifference – the list goes on. What James Alex (vocalists, guitarist, and primary songwriter) and co. do is use different characters and stories to put these emotions and ideals on a pedestal. Basically, imagine what it would sound like listening to a Richard Linklater film and you’re getting close.

While last year’s The Things We Do to Find People Like Us was strong start to finish, A Loud Bash of Teenage Feelings lacks on certain songs. Many of the tracks on Loud Bash seem like there was not a lot of thought that went into the songwriting process. The first two tracks, “Future Mixtape for the Art Kids” and “Atom Bomb”, are examples of this. However, by the time “Hot Tramps” rolls around, the rest of the album is just as stellar as The Things was.

The most obvious influence on Beach Slang is The Replacements. There have been various nods to The Replacements in Beach Slang’s music and lyrics (the opening guitar riff of “Punks in the Disco Bar” is awfully reminiscent of “Bastards of Young” by The Replacements). However, it is apparent from the interviews and the music itself that Alex and co. are not even attempting to hide their influences. In fact, Alex regularly makes playlists of his influences for his fans’ pleasure.

Alex’s lyrics are heavy with metaphors and similes: “palms like boxing mitts”, “eyelashes shine like plastic diamonds”, and “mouth…like a pile of sirens”. The lyrics come in bits and pieces, but create vivid images that can help one piece together characters and scenes.

In Alex’s Facebook posts for the band, he often waxes poetic about playing music for outcasts – people who feel like they don’t belong anywhere. His earnestness is unashamed, enviable, and unique in a cultural climate that is cynical and filled to the brim with irony. Beach Slang is just doing what they love, and that’s all that matters.