If you’re living in 2016, the idea that the media has a certain degree of influence in the thoughts and decisions of consumers is probably not a new idea to you. And if it is, then welcome to the other side. It’s pretty similar, just with a bit more self-loathing involved.

There’s been studies, and articles, and more studies on the reach of media influence. There’s even research that finds people to believe that the media has a stronger influence on others than it does them.

In theory, it sounds like we generally get the idea. But in practice we tend to overlook the media’s influence on our worldview. So do we really get it?

According to Joseph Erba, Mass Communications lecturer who recently lead a study on ‘understanding media influence’ or – media literacy-  those effects are engrained into us as we grow. But simply being aware of the effects is your main weapon in the fighting against the influences of media prejudice.

“Media has the most powerful affects when talking about experiences of people with whom the audience has no interaction or knowledge about. Knowing that, we can then check ourselves against those affects.” Erba said.

The study, which focused on perceptions of Black and Latino people on predominantly white campuses (KU in this case) measured how being made aware of this fabricated image can change student’s perceptions.

He continued by detailing the process of the study. “In one class, we lectured to students on how 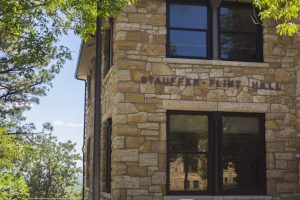 the media constructs identity and how those representations create the expectations for these groups.

The other [class]… we asked students to write down the first thoughts in their head when they heard the different racial groups. Then we had them exchange note cards… and then we had everybody read out-loud the notecards while my colleague and I wrote these stereotypes on the board…

What the students realized was that they were not the only ones thinking that way.

We deconstruct the stereotypes to help them realize these stereotypes are completely irrational. They don’t make any sense, but they make sense for the media.” Erba said

He continued on his understanding of the study’s usefulness stating “I think that this workshop… is a very nice way to start recognizing that nobody is immune to media messages. We have studies that show that the average American spends about four hours a day in front of a TV, four hours a day online, thats eight hours, assuming you work eight hours, sleep eight hours- your day is gone. So you do this until you’re 35, there’s no way you cannot be affected on some level.”

Implicit bias isn’t just reinforced by the media we ingest, but also social environments where things like racist jokes help “contribute to the narrative until it becomes normal” Dr. Erba explained.

He finished his point on media literacy’s wide utility by mentioning the tendency for people to subconsciously search for images that confirm their views, often focusing more on the negative aspects

“They’ll pay more attention to that than to something that doesn’t confirm [their views]. So we can use that model in the classroom, apply it to different situations with different audiences to expose the role that certain media messages may play in us being implicitly biased towards others.”

The study sounds hopeful in creating a more media conscious university environment, but the outlook is somewhat bleak when looking at the 30-year legacy of media literacy research that has been drowned out in our infinitely-expanding media universe. Erba stays positive however, using his experience in the classroom as a beacon for future possibilities

“The class that didn’t have any media literacy intervention; they’re perceptions stayed the same at all three meeting points throughout the semester” Erba said.

“But just having a discussion on stereotypes and how… [they] are constructed in the media can help students see people as people as opposed to media stereotypes.”