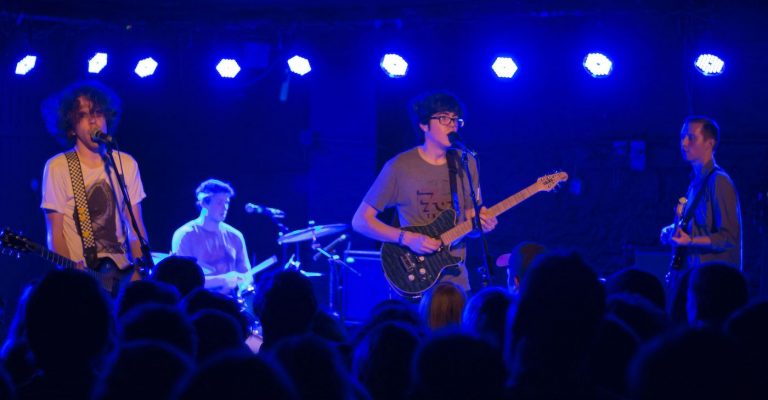 Will Toledo, the driving force of indie-punk band Car Seat Headrest released eight albums and three EPs before breaking out with 2016’s Teens of Denial on Matador Records. On this album, Car Seat Headrest hit the femoral artery of powerful indie rock and punk, which ascended them to the heights of the year’s best albums.

Their ascension to rock star status was fully apparent when the band took the stage of the Bottleneck on November 3rd. The crowd was ready to head bang, and from the first song played, that’s exactly what they did. As Toledo strummed through the opening riff of “Fill in the Blank,” the band kicked into gear and charged through the song with intensity.

Toledo, who is tall and slender doesn’t come off as much of a rock star, but as the best rock stars usually do, as soon as he played his guitar, the image was the last thing concerned. The rawness of his voice, the crystal clearness of his lyrics, and the fervor with which he plays guitar scream lowkey indie rocker who maybe spent too much time on the computer. But it’s on the computer where Toledo got his start in 2010, uploading music to indie/ DIY platform Bandcamp.

Any songs off of Teens was a surefire hit. “Unforgiving Girl” was a massive party starter that got feet moving early in the set. From there, Car Seat charged through “Destroyed By Hippie Powers” and a dark and brooding cover of David Bowie’s massively dark and brooding title track to his final album, “Blackstar.” Although a cover is rarely as potent and powerful as the original song, Car Seat’s cover definitely does the late, great Starman justice.

The culmination of the evening was hearing, possibly one of the top five tracks this year, “Drunk Drivers/ Killer Whales.” The song starts out with gentle lyricism before picking up the pace, and barreling into a powerful, hands-in-the-air, crowd-chanting chorus. If you ask me, Car Seat could have showed up, played this song, and left, and I would have loved every second of it. Seriously, this song is SO good. Please, give it a listen if you haven’t. It will change things for you, or at least worm it’s way into your top 50 tracks of 2016.

Finally, the band closed out the set and tore the roof down with “Connect the Dots” culminating in a nice little moshpit. It was especially awesome to see so many high school kids, no doubt in the midst of their awkward emo phase, just like me, dancing and jumping along to music like this.

With the current path to success they’re on, I’m eagerly awaiting news of a new Car Seat Headrest album. All the pieces are there, the fanbase is building by the hour, and the music is undeniably great. A fantastic live show is just the cherry on top.