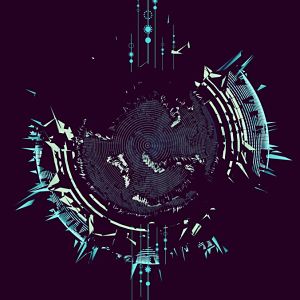 Beer On The Rug is probably the Lawrence area’s best kept musical secret. Specializing in experimental sonic adventures, the digital and tape-only label consistently produces some of the most interesting contemporary music. Suryummy’s Genesis Clarity is no exception. At times cosmic, at times oceanic, Genesis Clarity is a gorgeous album that takes the listener on a journey that seems to dilate time. It is actually incredibly evocative, both in its sonic structures and its song titles. For instance, “Chrome Buffet” feels mechanic to a fault, with synchronous synths that are both stainless and corroded and backed by a machine-distorted voice that sounds to be speaking a foreign language. “Pacific Trash Vortex” recalls the swirling deadzone of garbage in the Pacific Ocean with meandering guitar tones and a pulsating siren. “Stratus Formations” similarly evokes atmospheric flight through the buoyant condensed moisture structures described by the track’s title. Genesis Clarity is an achievement of sonic exploration and organic machine music.

Recommended If You Like: Boards of Canada, Eco Virtual, Beer On The Rug
Recommended Tracks: 3 (Chrome Buffet), 6 (Wet Video Cards), 7 (Stratus Formations)
Do Not Play: None
Written by Mike Van Esler on 11/10/2016