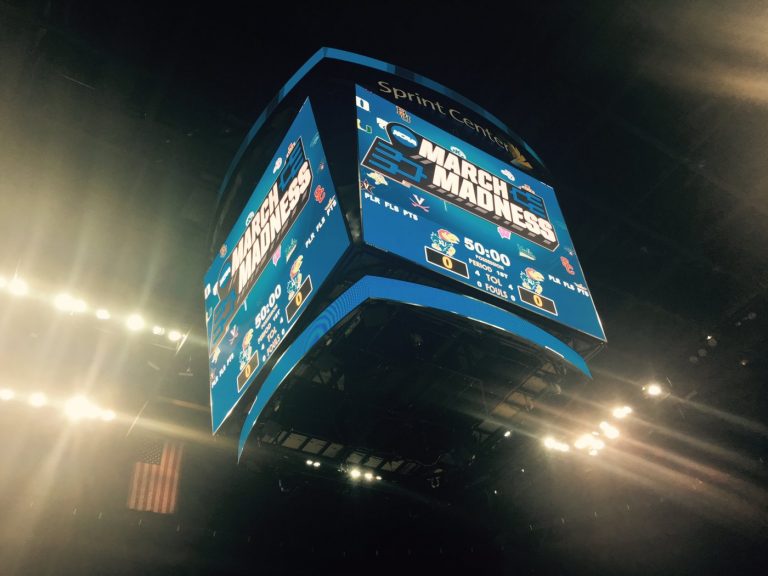 KANSAS CITY, MO – Two victories in the opening weekend of the NCAA Tournament paved a local route to the Final Four in Phoenix for the Kansas Jayhawks.

The first of two tests for Kansas (30-4) in the home-away-from-home that is the Sprint Center will be against the Purdue Boilermakers (27-7) on Thursday night around 8:40 p.m. The Jayhawks have a 34-7 all-time record in the Sprint Center.

“I think we’re all very comfortable, even just walking into the locker room right now we’re familiar with everything,” senior forward Landen Lucas said. “We’ve been here so many times. We’re happy to be here in front of our fans, and it’s definitely an advantage that we’re happy about.”

The Jayhawks are coming off a 90-70 win against Tom Izzo’s Michigan State Spartans, in what was a back-and-forth affair before closing out on a 21-6 run. KU will face another Big Ten conference foe, this time taking on the Big Ten regular season champion in the Boilermakers.

National analysts have questioned whether the Big Ten is experiencing a down year, but Kansas head coach Bill Self disagreed with that sentiment, pointing to how tough an opponent MSU was despite finishing 5th in the Big Ten.

“For Purdue to go through it and win the league the way they did certainly I think speaks volumes,” Self said. “I think anybody in the know knew that before the tournament even started.”

The key for Purdue has been the outstanding play of Naismith Player of the Year finalist, sophomore forward Caleb Swanigan. Swanigan is averaging 18.5 points and 12.6 rebounds along with 3.0 assists and 0.8 blocks per game. Bill Self says it will be challenge to cover Swanigan.

“They do as good of a job at getting the ball to him in different spots,” Self said. They create great angles to throw the ball into the post. If we can ever get two big guys again, I can certainly look at a lot of their tape to learn how to play, to be honest because Matt and them do a great job of doing that.”

The Jayhawks have their own Naismith finalist in senior point guard Frank Mason. Mason is averaging 21 points per game in the tournament. He also went 8-for-8 from the free throw line against MSU, mostly by drawing fouls off Spartan bigs, something he’ll look to duplicate against the Boilermakers.

Purdue reached the Sweet 16 for the first time since 2010. The Boilermakers haven’t reached the Elite 8 since 2000 and the Final Four since 1980.

Purdue held a 15-point lead against the Iowa State Cyclones in the Round of 32 before the Cyclones came roaring back to take a 2-point lead with 3:11 to go. A 3-pointer from P.J. Thompson initiated a 7-0 run to help give the Boilermakers a 80-76 victory and a ticket to the Sweet 16.

Kansas’ last tournament game against Purdue was in 2012, a 63-60 victory for the Jayhawks in the Round of 32. That Kansas squad, led by junior forward Thomas Robinson, would go on to play in the National Championship game, losing 67-59 against the Kentucky Wildcats.

KU knows its advantage remains in transition and shooting from deep, but the Jayhawks played too fast early against MSU. The Jayhawks had few turnovers, but forced 3-pointers earned Kansas just a 3-for-11 mark from deep in the first half. The team did better waiting for the open look in the second half, shooting 5-9 from three, led by Devonte’ Graham’s 4-for-4.

Caleb Swanigan’s 20 points and 12 rebounds were key for the Boilermakers in the victory over Iowa State in the last round. While his work inside will likely spell trouble for any Kansas big not named Lucas, Swanigan also was 3-for-6 from three and added seven assists. He’s an all-around player with great shooters all around him. Self will have to try various strategies to figure out how to contain the Big Ten Player of the Year.

Kansas will need for one or two bench players to step up. Vick usually pulls off the sixth-man role, getting seven points and five boards in the MSU game, but that might not be enough this time. Purdue has a capable stable of bigs, with junior forward Vince Edwards and junior center Isaac Haas to complement Swanigan.

KU has less options in regards to bigs, but Self teased an increased look for a fan favorite bench player.

“It may be who plays better together,” Self said about his big man rotation. “This is a game in which certain times we could actually play two bigs, Dwight and Landen could play together some. So a lot depends on who is in the game probably when we make our sub.

Coleby had a solid nine minutes with three points and four rebounds after Carlton Bragg got burned by Spartan bigs Miles Bridges and Nick Ward. You’d have to imagine Coleby is the better option especially if Haas gets extended minutes.

You can listen to the play-by-play broadcast of the game on 90.7 FM KJHK with Nick Lewis and Jared Lenz on the call. Follow @KJHKsports on twitter for news and live updates from the Sprint Center in Kansas City.