KJHK staffer and long-time punk rocker, Kat Werner, talked to Steve Miller of Philadelphia based, Spot Collins, one of her all time favorite folk-punk bands. Read on for the interview. 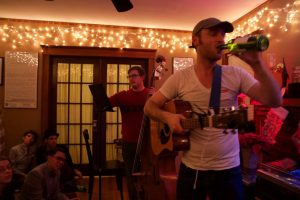 Let’s start off with the basics. Tell us a little about yourself – who is Spot Collins? Where did the name come from?

Spot Collins is—or at least I thought it was—a character from the 1992 Disney musical ‘Newsies.’ It’s this not very good but really entertaining movie starring a young Christian Bale about New York newsboys in the late 1890s who go on strike against your William Randolph Hearsts and the like, singing and dancing all along the way.

Anyway, there’s a character who runs the Brooklyn newsboys, and I swear—I SWEAR—they call him Spot Collins. But a look at IMDB reveals that the character’s name is really Spot Conlon. So yeah. That’s where the name comes from/doesn’t come from.

When did you first start making music?

Well, Spot Collins co-founder Eric Cowan and I started playing music together way back in junior high, so I guess we were thirteen or so? Back then we were in this ska-punk band called The Monarchs. I think the band’s MySpace is still up, actually. But he and I have been collaborating on songs in one way or another ever since. Spot Collins didn’t really exist until we were seniors in college, though (2012-ish).

What music did you grow up listening to? Do you have a memory of when you first realized music was important to you?

As indicated by my being in a high school ska band, that genre was a big part of my life at one point. Though I feel like it is for any alt-inclined 12 year old. I still love going to ska shows. They’re more fun than most, I’d say. But I think it was really in discovering bands like Pavement and Belle & Sebastian that I got ‘into music,’ as it were. Back in high school it was all your typical 2000s indie rock stuff. Decemberists, Wolf Parade, Death Cab. But I was also really into a lot of more songwriter-y types. Primarily Conor Oberst, Neil Young, and Leonard Cohen. That eventually evolved to the Mountain Goats, the Magnetic Fields, the Hold Steady. I went through a big hip hop phase in college. I think that’s really when I got into the idea that lyric writing could be more of a craft than art. Now it’s pretty much entirely metal with some synthwave in there.

As far as specific moments go though, it was definitely the first time I heard Pavement. I had picked out ‘Crooked Rain, Crooked Rain’ from one of those BMG music catalogues that doesn’t exist anymore because I thought the cover looked cool. The CD sat in one of those big disc binders for a while until I went on a family vacation at 13 or so and pulled it out to listen to on a long ride through Colorado. That was the first band that really meant something to me as someone who wanted to make music myself.

What inspires you to make music? Do you have a certain creative process in making music?

The things that have been driving me creatively have changed a lot in the last two years or so. The first Spot Collins songs were written almost to a prompt. I’d pick a story or scenario and then try to write within those rules. So something like ‘Leopold in Love’—it’s meant to be a sort of ‘Bandlands’-y take on the Leopold and Loeb murder from the 1920s. I was getting real into Clarence Darrow at the time, and thought that the L&L story more or less fell into the romantic spree killing trope. So I just wrote it from the character’s point of view within that world.

A lot of the early Spot songs were like that. Kind of detached. Emotionally sterile. Like, there wasn’t a lot of me in them. I was just trying to be clever with wordplay and whatnot. I was able to write a lot of songs when I was approaching it from the that angle. It was easy working off decided subject matter like that.

Since then, I’ve really slowed down on the writing front. I’d say I’ve written maybe four songs worth keeping over the past two years? The songs have gotten a little more personal in that I’m trying to write with some emotional honesty from a perspective and experience I know. I still like framing things with a narrative—it gives me some direction and allows me to explore themes a bit more thoroughly if the song itself still lives in a fictional universe. But I’m trying to make the songs say something of a bit more substance nowadays. And that’s probably why I’ve been writing so little.

I feel like everything I wrote from like 2012-2014 was informed by the sensibilities and experiences I’d accumulated in high school/college. But my life is distinctly different now, and I think I might have to go through a gathering stage of sorts for a little while. Build up some lived material before I have anything new worth saying, ya know?

Do you consider yourself to be a part of a particular music scene or community?

When we first started out, we got a lot of love from the internet’s folk-punk communities. We weren’t exactly of that genre to begin with though, and we’ve strayed even further with time. In a physical sense though, yes, we were a part of the DIY folk scene up in Boston, and since moving to Philly, I’ve found a similar home on the scene here. I’ve really got to work on putting the band out there more in that sense. I’ve never really enjoyed performing all that much, and I’ve sometimes struggled with the social aspect of being a music person. But Philly’s been exceptionally welcoming to this project. It’s a wonderful city to play music in. 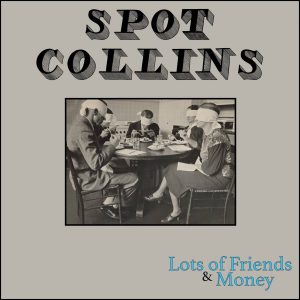 If Spot Collins were a type of shoe, what shoe would you be?

Is there anything you hope to communicate to your listeners through your music? What would like people to take away from it?

I think my general thesis, in so many words, is that everything’s made up, and that anyone who pretends to know anything (myself included) is not someone worth listening to. I feel like we trick ourselves into believing there’s something to figure out, and I think a lot of what I write is me trying to convince myself that there’s nothing to figure out in the first place. Not to say that everything’s meaningless. I think that sort of nihilism is a bit immature, though it’s certainly an outlook I held at one point. But just to say that we’re in this constant state of becoming, and that you will always know more later than you do now, so you should probably just shut up and observe.

Do you feel like your music represents you well as a person or group?

I believe so, yes. The music has always felt like a pretty on point representation of the sensibilities that Eric and I share, be it humor, worldview, or whatever. And even though we’re geographically estranged at the moment, it still really feels like our band. Like our dynamic still colors the songs I write even if we aren’t working on them together.

I’ve been writing and playing with my buddies Ethan and Jon (of Philadelphia bands Pauline and Clenn Planetts, respectively), and they’re really helping lend a new musical approach to things. I think that will prove beneficial to the overall direction of the project.

Where do you stand with the whole In-N-Out vs. Shake Shack controversy?

Well, up until the time I moved to Philadelphia, I had neither one nor the other available to me. There’s Shake Shack’s everywhere now though. And I gotta say, they have perfected the walking hamburger. So compact, no mess, great packaging. Man. Can’t beat it. In-N-Out does have that animal sauce though. I also recently had Wahttaburger while in Arizona for a wedding. That’s another regional one that I think ought to be a contender.

Is there a song you’ve written that you’re particularly proud of or that’s your favorite?

Every new song I write is my favorite Spot song. I think that’s a good thing? I wrote one recently that I’ve been working on recording, it’s my favorite one yet. But if I had to pick one that’s already out there, I’d probably say ‘Bend it Like Becker’ off of Lots of Friends & Money.  It’s one of the few good choruses I’ve written. I think I’m not all that great at writing choruses. But that’s a good one.

What would we see if we took a look at your iPod? What’s the last song you listened to?

A lot of metal lately. For the last two years or so I’ve been listening primarily to sludgy doom and black metal. I’m going to see Eyehategod this weekend for Mike IX’s first show back with the band after a while. So stoked. I think that since the music I write is rather conventional and precious, if you will, I find that heavy music is a good outlet for emotions I’m not really able to express through my default ‘voice’ or whatever.

What can we expect from Spot Collins in the near or distant future?

Well Lots of Friends & Money —the EP we released in December 2016—took a long time to put together between getting parts recorded in Philly and in Boston, tracking drums, finding time to do vocals between work and other life stuff. I can’t say it was all that enjoyable of a process. I’m finding I don’t do well in a studio setting. I always feel like I’m wasting the engineers’ time or something. I don’t know. I’ve always been self conscious about rock and roll.

Anyway, to avoid that stress, I’ve been getting back to recording things at home on my own like we did with the early releases. I’m trying to do a lot of writing and recording that I hope will yield a record later this year. It’ll be way down in the lo-fi end of things, but I think that will be good, or at least it’ll be a more genuine reflection of my abilities. Like this is what I’m actually able to do with what I’ve got.

*Photos courtesy of the band and Elise Greenberg