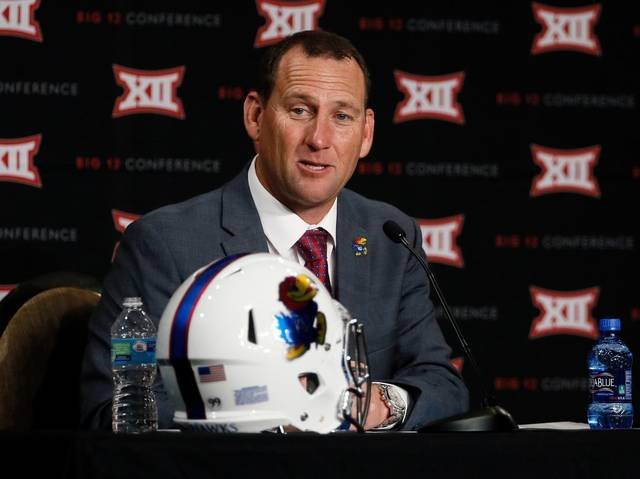 It would be irresponsible for me to sit here behind the comfort of this computer screen and contend that my opinion the sports world holds any real weight. Anyone that knows me knows that I’m the most fanatical of fans when it comes to Kansas football, and that is no easy title to hold considering the climate surrounding the football program.

Game in and game out disappointment sets in, usually by the time the third quarter hits the 5 minute mark and it hits me “we’re going to lose.”  I never leave early. I refuse to leave the seats that I and my “God Bless Kansas” sign occupy empty, even if the bleachers around me show the steel-grey emptiness of seats abandoned. So believe me, I know the feeling. I consistently feel depressed on a weekly basis and the football program is usually the catalyst for those feelings. It’s the sport I love, and it hurts to see the team I love lose.

Who can blame the fans who leave, though? After a promising end to the 2016 football season, with an overtime win on senior night against the Texas Longhorns on a game-winning field goal from Matthew Wyman, and the closest game Kansas has played against in-state rival K-State in years,  in Manhattan to boot, the Jayhawks have started the season 1-2. With the two losses, and even the win over FCS Southeast Missouri State, exposing a lot of glaring issues the team is facing, most notably, a very young secondary who still looks like they’re trying to find their footing in their positions.

A disappointing start to such an over-hyped season has led many a sports analyst, from the fine folks at SB Nation’s Rock Chalk Talk to the Lawrence-Journal World, already speculating on who should replace David Beaty at the end of the season and despite my being unqualified to comment on the musings of the big dogs in the sports media world, I can’t help but feel this is short-sighted thinking.

How quickly we forget, it seems, the situation that Kansas football was left in by ol’ Charlie Weis. A terrible hire that didn’t make any sense and I’m not sure what Dr. Zenger was thinking when he did it. If you can’t win at Notre Dame, why would you be able to turn a Kansas football program around that was left in shambles by Turner Gill (who, on an unrelated note, will be rejoining his colleagues on the FBS level when his Liberty Flames transition into a FBS-Independent next season. Perhaps Kansas will meet up with them someday).

All of this in mind, let’s take another factor into account; when Coach Beaty was hired, we, the fans, the Jayhawks in the stands, whether we’re students, lifelong fans, donors, or alumni, were given a caveat to this hire, that being, it’s a process. He coached through his initial contract and signed an extension through 2021. That’s the length of the contract he inked, and so, he deserves those years to let his experiment play out. We aren’t even halfway through this five year process and we’re already seeing support falter.

I’m not even speaking from a sports analyst’s point of view because I’m not a sports analyst and I don’t claim to be, but it’s irresponsible for us as fans and would be irresponsible for us as a program to abandon this five-year plan before we’re even to the halfway point of it. If nothing else, but because we doom ourselves to more lack of program consistency. Glen Mason, a Kansas coaching great who led our program to two Aloha Bowl victories in the 90’s over UCLA and Brigham Young respectively, is noted by Sports Illustrated as giving his two cents on the Kansas football program back in 2015, saying, “There’s absolutely no continuity in that program. It’s not just that you’re changing the coach. You’re changing recruiting emphasis. You’re changing assistant coaches. You know, coaching is so much about relationships, internally and externally. It’s been a disaster.”

In the same article, former Kansas quarterback, who transferred to play at Boise State this year, Montell Cozart, notably described the culture that Charlie Weis established at Kansas, “Guys were uptight, like they were walking on glass, trying not to mess up and not being themselves.”

Weis was infamous for calling his team a “pile of crap” at the 2013 Big 12 Media Days, and it arguably ruined team morale for the rest of that season. Then you have David Beaty, a man who is noted for not being afraid to share his faith, or his emotional thoughts. Who teared up talking to his players when he was first hired and you have something that feels refreshing. Someone who feels like he actually cares about Kansas and cares about these players.

I respect him as a man and as a coach. I respect and understand the task he took on, and seeing as we aren’t even halfway through this five year plan yet, I think it’s irresponsible to call for the firing of somebody who has laid a great foundation for rebuilding.

Gill and Weis destroyed the foundation that Mangino laid. They uprooted and utterly destroyed and disregarded Mangino’s plan and as much as many fans want to see Mangino return to the program, it’s never going to happen. He’s gone. That foundation is gone. It’s time to look to the future.

If we fire Beaty, after seeing progress, and yes, despite what the win-loss column will tell you we are seeing legitimate progress in the program, be it culturally or in terms of how competitive the team has been in Big 12 play. We lose his solid foundation of integrity, personal responsibility, acknowledging the importance of real relationships with your recruits, as opposed to the Weis strategy of promising playing time because their teammates would be “piles of crap”. The importance of discipline, on and off the field, and the emphasis put into strength and conditioning.

As Glen Mason noted, continuity of a program is a must and we, as fans, have to acknowledge that ourselves, and resist the temptation to pine for instant results, lest we lose our program’s new foundation and never see Kansas have a winning season in any of our lifetimes. We as fans need to lay our own foundation as well. So, to quote the sign of a fellow fan who hasn’t missed a game yet either, “Trust The Process,” and give these men time to build up from the foundation they are still establishing.