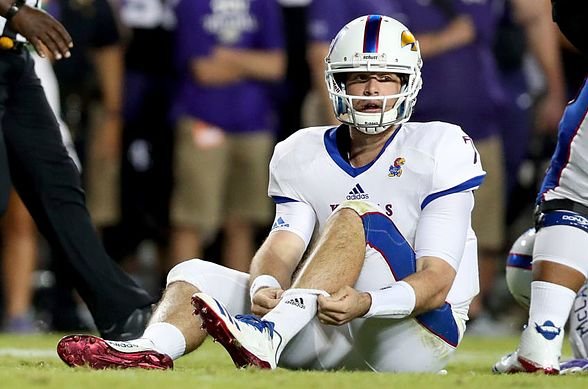 Baylor Freshman quarterback Charlie Brewer threw for 315 yards and 3 touchdowns as the Baylor Bears defeated the Kansas Jayhawks 38 to 9 on Saturday afternoon at Memorial Stadium.

Baylor picked up its 1st victory of the season in a battle of the Big 12 cellar dwellers. Both teams are now 1-8. Baylor moves up to 9th in the conference and the Jayhawks return to familiar territory at the bottom of the conference.

After one quarter of action KU and Baylor remained tied at zero before an offensive explosion by the Bears resulting in a 21-6 halftime lead.

The Jayhawks managed to sustain a few long drives, but they were forced to settle for field goals each time they got into Baylor territory. Senior kicker Gabriel Rui finished the day 3/4 on field goal attempts.

The Jayhawk defense struggled in the 2nd quarter to contain the Baylor offense as Brewer picked apart the Kansas secondary.

KU managed to slow down the Baylor rushing attack but had no answers for the Bears’ passing attack.

Sophomore running back Khalil Herbert rushed for 71 yards on 10 carries for KU.

KU will travel to Austin to battle the Texas Longhorns, a team that they defeated in dramatic fashion last season.

Baylor heads back to Waco where they will host the Texas Tech Red Raiders next Saturday.