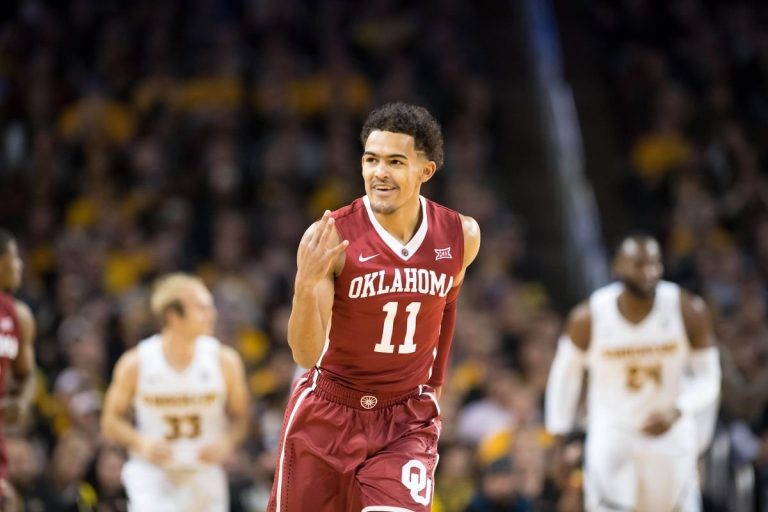 Heading into Kansas’ Tuesday night matchup with Oklahoma, it seemed like the Jayhawks would only be taking on one player.

Trae Young, the freshman phenom point guard, has swept the nation and made his case for National Player of the Year. Young, put up 48 points on 39 shots Saturday against the Sooners’ in-state rival, Oklahoma State, but even with his prolific scoring, the Sooners fell to OSU, their second consecutive loss.

ESPN hyped up the game, playing their commercial for what seemed to be 10,000 times over the weekend.

Throughout the first half of KU’s bout with Oklahoma, Young was kept at bay, scoring just eight points on 3/4 shooting, and yet Oklahoma took a two point advantage into the locker room.

Half number two was were things got particularly interesting, as Kansas jumped out to an nine point lead early in the period. Oklahoma managed a quick rally, pulling within two, and Kansas traded the blow for a 10 point advantage with 9:25 to go.

From that point on, Trae Young managed 11 points for the Sooners, and lead Oklahoma to an 85-80 victory.

With 3:46 to go, Oklahoma subbed in Matt Freeman. Why is that important? Matt Freeman played two minutes in the game, and played perhaps the largest role in the game.

Freeman was in the game for exactly nine seconds before fouling Kansas center Udoka Azubuike. That foul put Azubuike to the free throw line for a one-and-one, which Udoka missed.

At the 1:36 mark, Matt Freeman fouled out of the game. Yes, you read that correctly. Matt Freeman collected five fouls in two minutes and 10 seconds. Four of those five fouls forced Azubuike to the line, and he didn’t make a single one in that stretch.

In that period of time, the Hack-a-Shaq method, or in this case, the Poke-a-Doke, allowed Oklahoma to tie the game in it’s most crucial stage.

From the time Matt Freeman exited the game, OU outscored Kansas 5-0, and found themselves the victors.

Kansas had their streak of five straight wins stopped by a cringe-worthy coaching method. A method that worked. Udoka Azubuike has appeared to have negative confidence at the line this season and specifically tonight. Credit Lon Kruger, a veteran basketball coach for finding a way to allow his team to get guaranteed stops, and most importantly, credit Matt Freeman for his five fouls.

Kansas will be back in action on Saturday, January 27, taking on Texas A&M in the Big 12/SEC Challenge in Allen Fieldhouse. Catch the action on 90.7fm KJHK, with pregame starting at 2:30pm, and tip-off at 3:30.