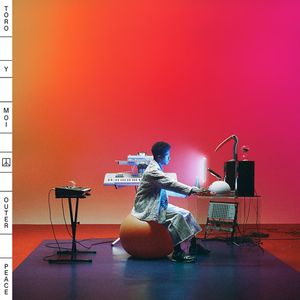 Finding peace in the world is a difficult process which can challenge you to begin thinking outside of yourself. Outer Peace is a cleverly-crafted, pleasantly mid-fi album of melancholy grooves that Toro y Moi uses as a medium to tell us his stellar keys to what it takes to achieve peace on the outside.

Chaz Bundick, who goes as Chaz Bear now, started his music career with some bedroom recordings he released under the name “Toro y Moi” in his hometown of Columbia, South Carolina. He is now considered one of the first artists to be deemed “chillwave” due to his ambient, R&B sound. In previous works, most notably Boo Boo released in 2017, Bundick strayed away from full-fledged vocalization in order to focus more on the music in an attempt to perfect his mellow, dreamy sound. But with Outer Peace, Bundick completely intertwines the sounds and his vocals in harmony to create a promising future for disco funk. He draws his inspiration from the unmatched sound of Daft Punk and the eclectic synths of Wally Bardou, an underground musician from France. He combines these staple elements of popular dance music with his “chillwave” uniqueness to create Outer Peace. The brilliance of his inspiration is extremely apparent in tracks “Freelance” and “Laws of the Universe” who will have you unintentionally bobbing your head. The album showcases Bundick’s ability to evolve and challenge himself through his music. For him, it’s all about the level up and this album is a manifestation of that. “Life is only wishing we could load it/ Level up, you’ve got to make a bonus,” he declares in “Freelance,” an ode to the honest, demanding process of hard, freelance work. But each song exercises an individual sound that is almost indistinguishable as the tracks practically melt into each other. The third track, “Laws of the Universe”, is reminiscent of the joyful groove of disco funk but after a single beat, Bundick slyly slides into the deep, celestial beat of “Miss Me (feat. ABRA)” leaving the listener no room to breathe. But Bundick composes this album in such a way where you almost don’t need that breath. The contrast between the sounds of each track are exemplified through the smooth transition, proving Bundick’s skill to organize diversity in his music.

Progressing in one’s music is not an easy task, as musicians can often lose their way in pursuit of finding themselves. Outer Peace feels like a transitional piece, as Bundick discovers new, interesting places while revisiting old places, and you can only hope he’ll continue growing at any fork in the road. Chaz Bundick’s “chillwave” sensibilities and expertise shows a promising future for his own music, and the future of this year’s music as well.

Recommended If You Like: Blood Orange, Unknown Mortal Orchestra, HOMESHAKE
Recommended Tracks: 2 (Ordinary Pleasures), 3 (Laws of the Universe), 7 (Freelance), 8 (Who I Am)
Do Not Play: None
Written by Caroline McCone on 02/19/2019