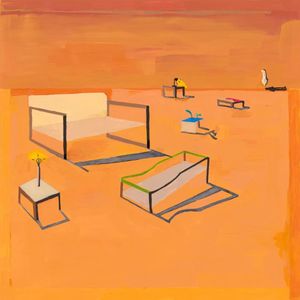 Some of the greatest ideas are results of introversion and boredom. The Montreal-native returns after two years since his latest release, assuring his fans that he was busy doing “nothing.” HOMESHAKE reminds listeners that solitude is a virtue through their limp beat, experimental R&B album, Helium.

As expected from a guy whose previous works are titled Midnight Snack and In the Shower, Peter Sagar is a simple man with a simple life. HOMESHAKE is the popular brainchild between Sagar and his solitude that has produced steady, wavy beats paired with isolated guitars and dreamy synths. Sagar, originally from Montreal, is no stranger to this dreamy synth-rock type as he is the former guitarist for Mac DeMarco, a friend and inspiration for Sagar. After experiencing the hectic, exhausting process of touring the world, Sagar resigned from DeMarco’s band and underwent a reflective period back in Montreal where he worked on solo material. His first album, Midnight Snack, establishes Sagar’s eclectic yet contrasting jazzy tone that he’s stuck with for four albums now.

Sagar carries that over into Helium with a few other new additions involving off-key vocal distortion, such as track 10 “Salu Says Hi,” that makes you question if HOMESHAKE is really this lazy or actually a creative visionary. The album kicks off with one of Sagar’s specialties; the lo-fi instrumental titled “Early.” With the first note of the staggering, dreamy synth, it feels as though both HOMESHAKE and the listener are waking up and slowly beginning to register that another day is about to begin. Continuing into the album, HOMESHAKE alternates between the instrumentals and songs with vocals as Sagar can’t decide the best way to put down his thoughts. Although both variations of his work express that Sagar has become magnetically attached to his home, proving difficult for him to escape. He becomes so lost in his daydreams that he begins imaging how much more successful he would be as a musician in track two, “Like Mariah,” if he only had the incomparable vocal expertise Mariah Carey does. On track seven, “Just Like My,” Sagar battles against solitude, and doesn’t know how to escape it. Perhaps it’s a lack of motivation or conviction, but he isn’t quite sure where to start. “I should switch up everything/I don’t feel like anything else/ Not sure how to deal with it/ Maybe I can figure it out, give me just a quick second or two,” he casually laments, signaling it may be too late for him. There is a stark contrast with this song; the beat is upbeat and wavy but the lyrics contradict that with Sagar’s deep concern. However, he still keeps trying. Track five, Sagar has a night out with friends but can’t seem to shake that feeling of loneliness. Despite knowing he’ll be alone as soon as he gets home, he repetitively begs “Let me be here all night long/ Let me be/ Let me be here all night long.” You can’t blame a guy for trying. HOMESHAKE concludes the album with a nonchalant, R&B jam titled “(Secret Song).” It’s the end of the album for the listener, but the closing of another chapter of Sagar’s life. At the end, he discovers that the only way to change is take of himself.

Helium combines Sagar’s social anxiety with the ominous, yet comforting “standing in front of the refrigerator” vibe of his sound. The entire album, you’re rooting for Sagar; supporting him his dreams of “singing like Mariah,” celebrating his efforts, and sympathizing with him when he acknowledges his solitude. However, the ultimate person rooting for Sagar is himself. It’s obvious that he is revisiting sensitive territory in this album, but he manages to express it with such individuality and commitment to his own music. It’s so honest and intriguing, but also just something helpful to listen to when even the comfort of your own home feels unescapable.