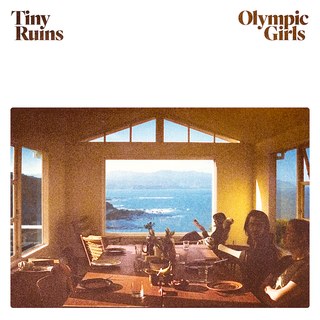 Released February 1st, 2019, Olympic Girls is the anticipated follow-up to the critically acclaimed 2014 album Brightly Painted One; and following up an album that won numerous accolades, including Best Alternative Album at the New Zealand Music Awards, was surely no easy task. It was a task that the New Zealanders took on with great confidence and made look easy, however, as the product is an album which is highly explorative and unique while maintaining the easy to listen to, simple style that Tiny Ruins have patented in their decade together.

In a time when music is often too busy and complex, Tiny Ruins and leader Hollie Fullbrook have produced a minimalistic, quiet album that represents both a band in its creative prime and contemporary alt-folk at its very best. The intro title track is the perfect way to set the album off: compositionally free flowing and lyrically heavy. The soft and soothing instrumentals of “Olympic Girls” set a perfect scene for Fullbrook to take over and show off her brilliance. The wonderful feel of the song is captured in the beautifully-sung lyrics “You only had your Olympic girls/The frosted sheen of leotard twirls/Running revolt and winning gold.” The title track is far from the only stand out on Olympic Girls though; two songs later comes “How Much,” the most forward track on the album. Fullbrook and Co. come right out and ask the listener “How much would you be willing to give?” The song certainly gets the listener thinking, while the soft vocals and melody assure that no one will be overwhelmed.

Not all of the album feels so direct, however. Tiny Ruins shows their range in the dreamy “Holograms.” A song that helps to bring the album and the band more to life, “Holograms” starts out with an already different feel to it. The track offers the most catchy chorus on the album and locks the listener in for the second half (as if they weren’t already all in). Perhaps the best that the album and Tiny Ruins has to offer comes with track #8, “One Million Flowers.” The song really does have it all: brilliant melodies, unexpected turns, curiosity, beautiful vocals, and deep lyrics. Hollie Fullbrook really showed off her songwriting abilities, and to be honest it kind of feels like she is bragging. The song is delivered with a feel of such simplicity and nonchalance, while I can only assume constructing it was anything but.

As a complete project, Olympic Girls is proof of the capacity of the underrated genre that is alt-folk. With a group of people in musical harmony around a front-woman like Hollie Fullbrook, music just seems easy and barriers seem nonexistent. Tiny Ruins have created a project in Olympic Girls that is both exciting and calming, mind freeing and thought provoking, curious and old-school. Fullbrook is an artist with potential through the roof, and if her next project lives up to the hype that will undoubtedly form around it, we are all in for a real treat.

Recommended If You Like: Sharon Van Etten, Angelo De Augustine, Julia Jacklin
Recommended Tracks: 1 (Olympic Girls), 3 (How Much), 5 (Holograms), 8 (One Million Flowers), 11 (Cold Enough to Climb)
Do Not Play: None
Written by Quinn Leyda on 03/20/2019