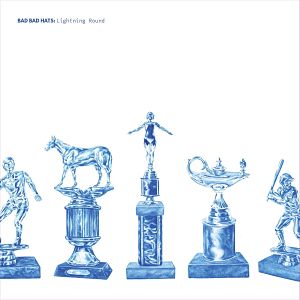 Taking the live recording approach to this album, the Bad Bad Hats drew inspiration from Fleetwood Mac and channeled Neil Young in the studio. The sophistication shows; the instrumentals are noticeably more mature and seasoned than their debut album and EP. Lightning Round offers a continuation of the upbeat love songs and meaningful lyrics found on their first release, Psychic Reader.

To really get a flavor for the maturation of the group, check out “Nothing Gets Me High.” It perfectly showcases the variability of Alexander’s vocals and seamlessly incorporates the synth. Just as bold, are “Talk With Your Hands” and “Automatic” which both offer buoyant lyrics and showcase the breadth of the band. Lightning Round is not to be ignored, it manages to incorporate the Bad Bad Hat’s youthful charm with their signature melodies.