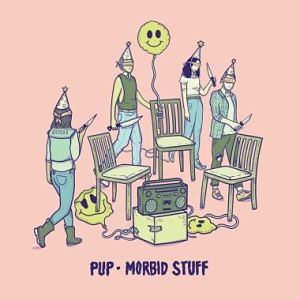 Morbid Stuff, PUP’s most recent release embodies the hallmarks of punk – ire, pessimism, and aggression – while adding their own fiery twists. Stefan Babcock (vocals, guitar), Nestor Chumak (vocals, bass), Zack Mykula (vocals, drums), and Steve Sladkowski (vocals, guitar), all from Toronto, Canada, formed PUP – formerly known as Topanga – in 2010. Since the band’s inception, the four guys have put a premium on capturing reality, albeit through their own nihilistic lens.

PUP famously does not employ any sugar-coating in their lyrics, instead they are unapologetically honest and raw. As seen in their self-titled debut album, PUP has been combining the sounds of punk with pop hooks for nearly a decade now. By their second release, The Dream is Over, the band sounded more mature and homed in on their trademark self-deprecating lyrics. As evidenced by their depth and range, PUP has taken inspiration from bands like Phish, Dream Theater, and Rush. And by the release of their third and newest album, Morbid Stuff, PUP is separating themselves and establishing a unique sound of their own.

As the title suggests, the theme of the album is in fact morbid stuff; PUP channeled their fatalistic thoughts into all eleven tracks. But, the band did so artfully, offering the slightest glimmer of light at the end an extremely dark tunnel through humor, bluntness, and acceptance. “Kids” is plain-spoken and very cutting, letting the thrashing drums and guitar do the walloping. Employing similar sounds, “Scorpion Hill” slows the vocals down a bit. On a more nostalgic note, but still a very dark one, “Bloody Mary, Kate and Ashley” is misleadingly upbeat. Morbid Stuff is exactly the meltdown of an album that the music world needs. Despite the presentation of societal qualms, painful relationships, and concerning mental dispositions, the album is energetic and even relatable, showcasing the band’s persistence through life’s perils.