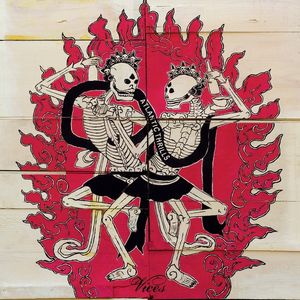 Atlantic Thrills hail from Providence, Rhode Island, but listening to this it’s almost as if they were writing to you from Orange County. With an impressive array genres on display, the band wastes no time convincing the listener that they’ll find something to enjoy on the sophomore effort, Vices. Somehow, this intriguing amalgamation of surf music and indie rock isn’t at all as haphazard as you might anticipate. In mere moments you can traverse a soundscape that sounds plucked right out of a Black Lips record before being thrust into sparkly post-rock passages. Though each track featured here is short and to the point, the overall length of the album is just about right.

Across 12 unique journeys, Vices imbues a sense of wanderlust, and in its presence creates an active listening experience. In moments where the songwriting embraces an esoteric quality, the band’s strength for composition becomes more truthful and apt. These are the moments worth latching onto, and they meld nicely with lyrical themes that explore a form of mindfulness.

Despite hosting so many distinct influences, the album never loses its bite or its ingrained punk attitude. With plenty of abrasion and groovy riffs, Atlantic Thrills never truly abandon their core identity; making the record a success in varying degrees. Despite the fact that the band is not breaking any new ground or attempting to innovate within the genres present here, it’s easy to identify and appreciate the nuance they bring to those sounds. If the band continues to develop its personality, their next record may well launch the rock ‘n’ roll vibe of the ’60s into new and unexplored territories.

Recommended If You Like: Black Lips, Built to Spill, Ty Segall