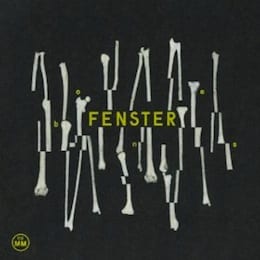 Fenster is a strange low key indie sound. It’s strange to hear as it progresses through the album; more instruments and sounds just keep coming up. It has this tinge of the southwest, too. Also, there’s a hollow, open and bigger sense that reverberates through out the album. Each song is simple enough but intresting as you listen for all the notes and changes it offers. The songs all seem to roll together as the drums pull it together with its simple beat. It’s sort of like an adventure through your dreams. I feel like this is what would be the soundtrack to Woody’s dreams. This is definitely something to play if you have a slower mellow set, though, some songs like track 1,9 have a bit more up tempo rhythm and more rocking although there are sporadic uprisings and tempo changes happen throughout. BTW, it’s a girl new Yorker and a Berliner male!