KJHK’s music staff shares their favorite albums of the year 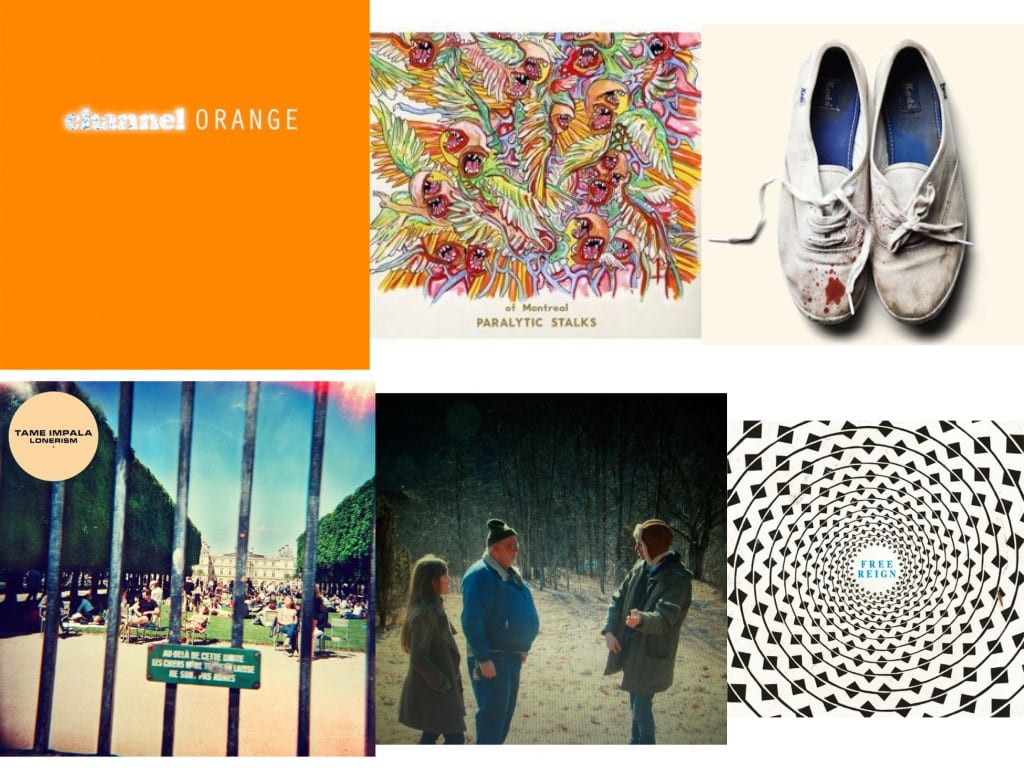 Hey everyone, this is Jake Waters, KJHK’s Music Assistant, bringing you some of the music staff’s favorite albums for 2012. The lists show off just how much variety 2012 had to offer. As a special bonus, I will be offering a few thoughts on my personal favorites of the year. Don’t be offended if your favorites don’t make the cut, but if you feel they should make your voice heard in the comment section. All feedback is welcome!

of Montreal continued to impress this year with their latest offering, Paralytic Stalks. After releasing a fairly straight forward pop album with False Priest, Kevin Barnes returned to his psychedelic experimentation and created and deeply personal experience full of raw emotions that has to be heard to be believed.

Swans created a highly visceral and often times frigtening soundscape with their latest album. They’ve been around for years but The Seer proves that sometimes it takes thirty years until you create your masterpiece. Tracks like Lunacy and the thirty minute title track are filled to the brim with disorienting sounds and pure raw power. Not for everyone but if you can handle it, it’s well worth the listen.

GY!BE surprised everyone with a new album this year, almost nobody knew about it although they had recently reformed so it was inevitable. They certainly delivered this time, GY!BE never fail to disappoint. If you’re a fan of post-rock, this is the album to check out this year. Not much more to say beyond that. Listen.

Fiona Apple goes long periods of time in between her albums but albums like this prove that you can’t rush perfection. Fiona Apple often times comes across as a more accessible Joanna Newsome on this record which is fine by me. Every Single Night is also contender for single of the year, just a great slice of Art Pop.

It’s Bob Dylan, of course he’s going to be on this list. Dylan continues his string of great late-period albums with Tempest featuring one of his best takes on roots rock in the song Duquesne Whistle. Other stands out include the John Lennon tribute song Roll On John and Pay in Blood. Some may find his voice to be too croaky these days but I find it adds an earthy tone to his songs.

Space Rock at its finest, Spirtualized create another trippy listening experience on Sweet Heart Sweet Light. Just listen to songs like Hey Jane and you’ll know what I’m talking about. Jason Pierce has been making music like this since Spaceman 3 so fans of that group should know what to expect. However, if you haven’t listened before and are looking to check them out this would be a good place to start.

Ty Seagall is a new discovery for me but when I heard his unique brand of garage rock for the first time I was a believer. Seagall is one of the few keeping the lo-fi 60s style psychedelic rock alive and the world is happier place for it. He’s released three albums this year and if I had to pick the perfect one to represent him, it would have to be Slaughterhouse just because I feel there’s no filler on this album but you would be hard pressed to find a bad song between the three.

8. Guided by Voices-The Bears for Lunch

Speaking of prolific bands, Guided By Voices reunion extravaganza reached a fever pitch this year with a total of three albums released this year. Not to mention solo work that Robert Pollard put out for himself as well. Out of the work that GBV released this year, The Bears for Lunch would have to be the best. With its upbeat, Beatlesque melodies and fuzzy guitar, The Bears for Lunch has everything a fan of Guided by Voices could hope for.

I was introduced to Grimes through my old roommate and I’m glad he did. With hooky synth lines and mumbled lyrics, Grimes takes the synth pop revival to its peak on this album. I am looking forward to seeing how she can top herself on the next album because Visions is almost perfect.

Steven Wilson and Mikael Akerfeldt are more well known for their respective bands. Wilson is known for the progressive rock group Porcupine Tree and Akerfeldt is known for his work with the progressive metal band Opeth. On their first full fledged collaboration, neither genre is applicable as Storm Corrosion is a psychedelic and atmospheric folk album. Storm Corrosion features whispered vocals, delicate acoustic guitar playing and ominous sounds that are hard to place. Check this out if you’re looking for something slightly eerie but that still retains a quiet sense of beauty.

5. Regina Spekt0r-What We Saw From the Cheap Seats