“50 Songs 50 States” is a 51 song album that documents one year in the life of an ambitious musician striving to make a living off of his music. Netherfriends spent 2010 – 2011 traveling the United States with the goal of writing, recording a song and playing a show in every state.

As a hip, music connoisseur you may say to yourself, “Didnt Sufjan Stevens say he was going to do that?” 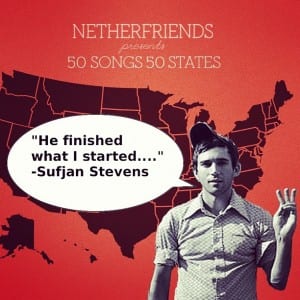 With 51 songs in total, the album is nearly 2 hours and 40 minutes of material. All of the songs feature dense soundscapes, mixing electronic and acoustic elements. The album hops genres from folk, psychedelia, ambiant and rock to hip-hop and funk. The songs rarely make reference to the geographic or cultural aspects of the state the song is based in (with the exception of Fairbanks, AK) but instead convey his personal journey while writing the songs. Major song themes include life on the road, loneliness, hardships and pursuing dreams.

The album is independently produced and released. It is also the first album to be released as an interactive map with blog post for every state detailing Netherfriends journey. Check it out here http://www.netherfriends.us/