In 1906, philosopher Charles Sanders Peirce wrote, “All this universe is perfused with signs, if it is not composed exclusively of signs.” In 1970, the Five Man Electrical Band told us “Sign, sign, everywhere a sign.” Entire schools of philosophy and linguistics are devoted to the idea that everything with meaning – words, thoughts, ideas – is bound up in a system of signs and symbols. For our November episode of Ad Astra Radio, we embraced the theme of IMAGES, and took a look at the meaning behind some of the images in our lives.

Download the full episode or scroll down for individual stories. 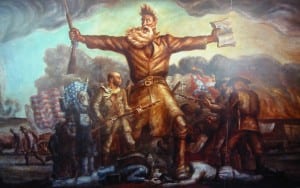 News Director Scott Ross introduces the theme by recalling the untouchable prankster image he and a friend cultivated in high school, and what happened when the image didn’t align with reality.

Reporter Valerie Peterson talked to tattoo enthusiast and apprentice at Old Souls Tattoo Parlour & Gallery, Ellen Goodrich, about the practice of having images emblazoned right on your own skin.

Reporter Beth Fentress attended a Spencer Museum of Art panel on censorship and controversial art, which looked in-depth at the opinions and emotions that can be stirred by a seemingly simple image.

Scott Ross spoke with filmmaker Chris Snipes about his ongoing documentary project Our Town, which seeks to make a living record of Lawrence, KS and our people, places and institutions.

Written by Scott Ross. Tune in to Ad Astra Radio when it returns in January in a new Thursday time slot on KJHK 90.7fm.