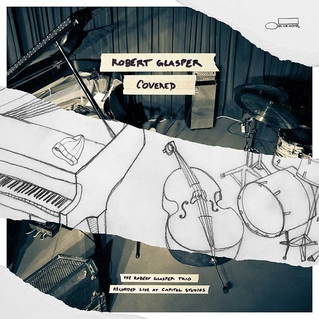 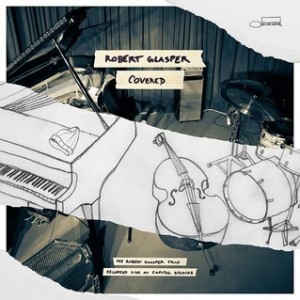 Smooth. R&B Grammy winner Robert Glasper returns to his jazz roots with this piano, bass, drums trio album. Following his award winning R&B album Black Radio 2, Glasper commented on track 1, “I didn’t want to do straight jazz – BOOM – out of nowhere.” Covered, appropriately named because these songs are covers of music Glasper enjoys and re-imaginings of some of his own work, draws a happy medium between jazz and R&B. Easy listening jazz with familiar melodies and sprinklings of dissonance keep the listener drawn in.

Early in the record we hear a jazz translation of Radiohead’s Reckoner. The cover is immediately recognizable to any Thom Yorke fan. It stays true to the original song’s melancholy tone. Glasper’s jazz interpretation gradually ripples forth and really grabs the track at the end.

The 13 minute long In Case You Forgot, track 5, is easily the most experimental of the album. Functionally, the track highlights each of the three musicians on the album. It begins with Glasper playing what sounds like a musical tightrope on keyboard. The recognizable cover-portion of this track begins around 4:13, but constantly interrupts itself with manic jazz keyboard riffs. Competition between the calm R&B melody and the imposing, fast paced solo riffs implies Glasper’s desire (and ability) to do something unexpected and original, but a recognition that he must break out of the barriers of his R&B success to do so.

On track 6, So Beautiful, the musical line lets loose into interpretive keyboards that vary from the original track’s calm, rocking comfort. This piece will make you feel yourself. Listening to Covered, I find myself waiting on the tracks to see when they diverge from recognizable acoustic covers to something more personalized…. This track nailed it. Another favorite from the album was Levels, originally by Bilal Oliver whose music video was directed by Flying Lotus…and Flying Lotus made a particularly wonderful remix of that track. Glasper took this already melancholy piece and added a WHOLE new layer of depth and emotion to it. Soft and touching with a firm, pushing melody- Glasper’s feel for an organic musical line truly transforms Levels something new and impacting all of its own.

The final track of the album, I’m Dying of Thirst, voices the album’s dedication to victims and families wrongfully killed by the police. The children voicing names of victims in the midst of a pressing keyboard line will tug at your heart. Its ever present, somber melody seems all too symbolic of the oppressing environment in which so many live and suffer here in the USA.

In all, Covered was delightful, touching, and absolutely worth listening to thoroughly. I hope to hear it ALL THE TIME on Jazz in the Morning here at KJHK.