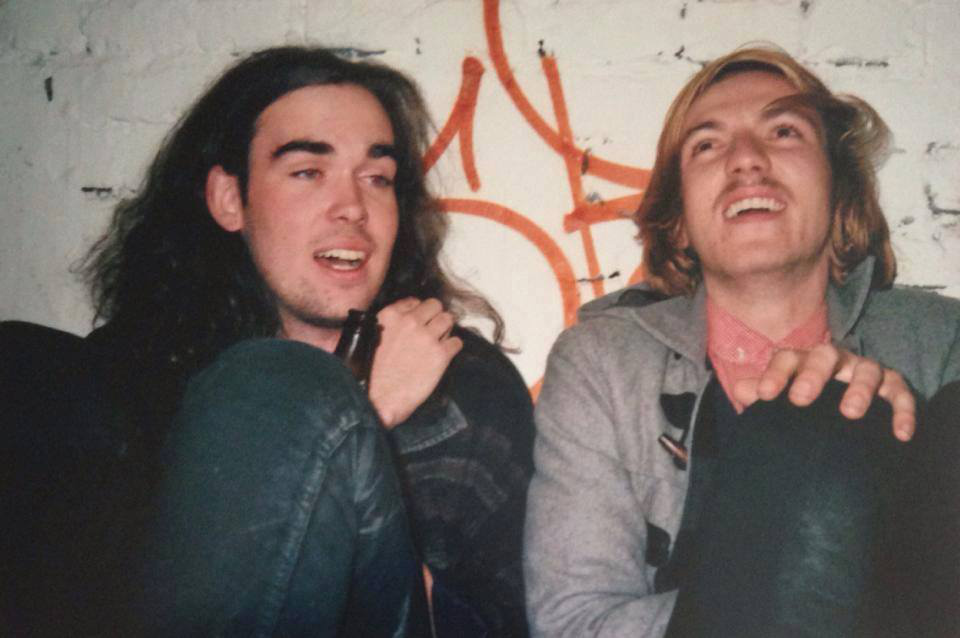 Australian indie-rock duo Good Morning is made up of guitarist Liam Parsons and singer/guitarist Stefan Blair. From Melbourne, the band is on tour in America for the first time and are playing a week full of shows at CMJ Music Marathon 2015 in New York City. KJHK Music Directors Kayci Lineberger and Harrison Hipp spoke with the band outside Elvis Guesthouse in Manhattan’s East Village on October 14, 2015.

Harrison Hipp: Is this your guys’ first time in America or have you toured here before?

Stefan Blair: We’ve been on personal holidays here before. Not as a band.

Harrison: Right on. Well, how did your residency here this week at CMJ come to be?

Kayci Lineberger: Yeah, how the hell did you get here?

Stefan: A lot of Dan Rutman (of Solitaire Recordings).

Liam: A lot of e-mails and a lot of dumb luck as well, I think. That’s about it.

Kayci: How long have you guys been here?

Liam: We got here on Saturday night so, what is it today? Is it Wednesday?

Liam: This is our fourth day.

Harrison: Cool. What are your impressions of New York so far this week?

Harrison: This is both of our first times. We’re from Kansas.

Harrison: That’s where our university is. We’re from KJHK.

Liam: Thank you! That’s really nice of you.

Kayci: Yeah, we have to give them some love.

Liam: What’re your guys’ impressions of New York for the first time?

Kayci: We haven’t seen a lot of it yet, but thus far it’s been good.

Stefan: Have you been busy doing press stuff?

Kayci: Yeah. We had a really, really early flight yesterday so we slept.

Liam: Oh, so you got in yesterday?

Kayci: We got in yesterday at 11 o’clock in the morning.

Harrison: Are there any other artists you guys are really looking forward to seeing at CMJ?

Kayci: Yeah, tomorrow. I think we’re going to catch his set either tomorrow or Friday.

Stefan: Is he playing Friday as well?

Kayci: Yeah, he has a seven o’clock set.

Stefan: I really, really want to see him so bad.

Kayci: Yeah, he’s one of our big ones. Panda Bear for sure.

Harrison: So, you guys are from Melbourne. What’s been your impression of New York in comparison? Have you experienced any sort of culture differences going from Melbourne to New York?

Stefan: Yeah, tipping is kind of weird. Especially for rider beers. They give you these drink cards for playing. A couple drinks but you still have to figure out how to tip on top of that.

Kayci: You’re going to charge me a tip?

Stefan: I don’t really know what they want.

Kayci: Also, how do you say Melbourne?

Liam: The feeling is mutual.

Harrison: Do you guys want to go into how the band got started? Is it always just you guys or are you joined on stage by anyone else?

Stefan: By these two boys.

Liam: By these two boys behind us James Macleod and John Considine. They play drums and bass with us. The record is just Stefan and I. We play everything on that and record it at home.

Stefan: We’ve just sort of been making recordings for a few years. Just last year we made something that we decided to put out, I guess.

Harrison: You guys have a few EPs out and are you working on any new stuff? A full-length?

Stefan: We’ve got another EP that’s done. It’s all ready but it’s being pressed to record so it’ll be out in January probably. There should be a single out. Hopefully in a couple of weeks, I think.

Liam: Yeah, I think we’re going to try to make a video for it while we’re here.

Kayci: On the subway, at Cats…

Liam: Holding up the torch of the Statue of Liberty.

Liam: Yeah, all the classics. Then we’ll work on an album when we get home.

Harrison: Okay, cool. Outside of your trip here, have you guys toured outside of Australia at all?

Liam: Never! We’ve barely even toured Australia. We went to Sydney once.

Kayci: That’s pretty impressive. From there to 10 shows at CMJ. It’s a heck of a platform.

Harrison: No doubt. Well, how did guys get your start with Solitaire Recordings? They’ve only been around since 2014?

Liam: Yeah, we sort of did it at the same time. We’ve known Dan and Hamish Mitchell, who run it, for ages. They were in a band called I’lls and they were really fantastic.

Liam: We’ve just known them for ages. They were starting this label and we sort of tagged along.

Stefan: It’s basically just a bunch of us releasing music through a common avenue of friends.

Harrison: I guess that’s the way it should be right.

Liam: They try to not make it just one particular sound. We’re on there but then there’s a lot of dance music and electronic and stuff like that.

Stefan: Everything else seems to be electronic besides us.

Liam: I think next year their release schedule is a bit more on our side of things.

Harrison: What sort of music did you guys grow up on from Australia? Any Australian bands that you really gravitated towards? Any new bands that we should know about coming out of Australia?

Liam: Silverchair and Powderfinger and stuff. Just like Australian rock bands. I don’t know if it’s a good band but that’s what I listened to as a kid. I haven’t listen to them for about five or six years. I can’t imagine I like it that much anymore.

Harrison: We checked out your guys’ schedule and officially it’s six shows but you said you’re playing over 10 this week?

Liam: Yeah, I think we have 10 all week. We had one beforehand on Monday that was sort of like a little warmup. Then we’ve got another one in a friend of a friend’s backyard in Bushwick, which will be really fun. A bit different.

Stefan: Saturday night, I think. They’re just putting it on. Just a bunch of friends putting a show on in the backyard.

Harrison: Yeah. With CMJ there are all the official events but there’s so much in between. It makes it a great week.

Liam: I think it’s a good. You probably want the balance. It would get a bit hectic just doing all these showcases and stuff.

Kayci: Yeah, being on such a rigorous schedule.

Liam: It’s nice we only have one show today.

Stefan: Yeah. We were pretty exhausted last night. We played two shows and then by 10 o’clock we were all just zombies needing to go home.

Harrison: So, for our listeners in Kansas, do you guys have any Kansas knowledge in the back of your brain floating around? What do you first think of?

Liam: It’s the flatlands, right? The prairies. So, I knew that.

Stefan: Aren’t Sam and Dean Winchester from Supernatural from Kansas?

Kayci: Yeah, they are.

Harrison: Yeah. Superman is from Kansas.

Stefan: I used to be Supernatural obsessed.

Liam: That movie “Looper” was set in Kansas City I believe.

Stefan: Oh, what its name?

Harrison: “The Wizard of Oz.” Sure.

Kayci: That’s the one thing about Kansas if you go abroad…

Liam: Oh! The band Kansas! I don’t know if they are from Kansas.

Harrison: They just came through Kansas!

Stefan: Are they big in Kansas?

Harrison: Yeah, their show was sold out.

Stefan: I think that’s about the extent of my Kansas knowledge.

Liam: Anything we should know about Kansas?

Kayci: Lawrence, Kansas is where it’s at. It’s a college town.

Harrison: We have a really great scene down there with venues, shows, and art in general.

Liam: Is it a lot of house shows and stuff or more venues and things?

Kayci: It’s a really good mix of both. I had a house show at my house last week actually.

Harrison: It was the 21st birthday for this gal over here.

Liam: Buy our record so we can come to Kansas!

Stefan: That’s about it.

Harrison: Alright guys, thanks so much!