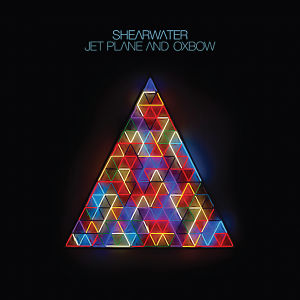 Shearwater, the main project of Austin, Texas artist Jonathon Meiburg, has historically been associated with the acts of its other members, namely Okkervil River and Swans. However, listening to their newest release, Jet Plane and Oxbow, it would be very hard to make that connection. Jet Plane and Oxbow is not necessarily a departure from their previous works, but it makes the appropriate stylistic measures to distinguish the band further, and these steps make an appeal to people not familiar with their previous seven albums.

What Jet Plane and Oxbow retains from previous Shearwater works is the band’s propensity to keep a wide variety of instrumentation with a folk timbre. The personnel has hardly been consistent for the band, and when the touring lineup includes Jamie Stewart (of Xiu Xiu fame), it’s clear that you’re going to hear a more eclectic collection of sounds. Most songs utilize an array of instruments one would hear in a folk-rock album, but they occasionally resort to other instruments, such as the piano for some melodies, and the glockenspiel for percussion. There are some exceptions to this trend, such as “Quiet Americans,” a call to the frustrations of American politics. In that track a synthesizer-based introduction sets the tone for what should be a synth pop tune, in the vein of Austra or Kavinsky. Instead, “Quiet Americans” simultaneously is a foot-tapper and head-swayer with moments of warmth (courtesy of Meiburg’s vocals).

Jet Plane and Oxbow distinguishes itself from Shearwater’s previous efforts by not being afraid to embrace a rock n’ roll sound and atmosphere. In the production, the drums hit louder and give more sense of rhythm than past albums. The guitar sometimes sounds kind of mean, a la classic southern rock (best be heard in “Glass Bones”). “Radio Silence” sounds like the kind of track one could expect to hear if they were at an arena concert, getting hyped by the pounding drumbeat and chugging guitars, and screaming along with Meiburg at the chorus. This addition makes Jet Plane and Oxbow an energetic and strong album from start to finish, and one to examine even if you didn’t quite love the band’s last works.

Do Not Play: 2 (Quiet Americans), 9 (Wildlife In America)