Bür Gür: Have You Lost Your Faith in God? 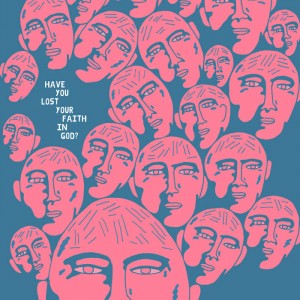 Los Angeles duo Bür Gür (try to pronounce those umlauts, I dare you) and their carefully orchestrated sophomore release, the psych pop Have You Lost Your Faith in God?, belong in the middle of a tropical acid trip. This is an album seemingly inundated with carefree feeling, where a first listen to most tracks, or the entire album (which is recommended) is energetic, full of movement and experimental sounds, and is distractingly enjoyable. It feels like a piña colada with a meniscus of liquid THC. You may not feel the deeper layers of emotion that Corbin Clarke and Makan Negahban tuck between the upbeat electronic sounds, delicately balanced harmonies, and bubbly staccato electric guitar riffs on a first listen. Let the album fester and dance between your ears for a while and it will expand, gaining depth with each track.

Themes switch from superficial to painful, an example of the versatility and quip of the entire album. “Bad Waves” describes a spliff smoked couchside before a surf session on a day where you “just don’t give a f*ck,” and “If I Were A Child” explores the kaleidscope of wonder children operate with, hoping that we don’t have to lose that wonder and it can coexist with nihilism and musings on death. The album begins to feel repetitive  on a first listen five or six tracks in, but the recipe of peppy dreaminess that Clarke and Negahban have created is still massively enjoyable. Luckily the album opens up about halfway through and starts to experiment by bringing in trippy samples, new song structures and acoustic pickings to wash away any doubt that the 14 tracks could lose their luster.

Have You Lost Your Faith in God? isn’t Dan Deacon’s America or Panda Bear’s Panda Bear Meets the Grim Reaper, but it doesn’t need to be. This release falls on the more digestible side of trippy where melodies are almost always tangible and lyrics are meaningful. It’s a damn good album from a pair of fellows that have their sound fine-tuned even amidst loads of experimentation. The production is fantastic, it’s vocabulary is almost educational, and there isn’t a less than entrancing and groovy track.

Recommended Tracks: every track deserves some spins, but to start off check out 11 (If I Was A Child), 2 (Lungs), 4 (War Games)