Many readers are probably aware of the increasingly silly, gangs-gone-wild “Death Wish” sequels. This is the series that introduced the world to Bill and Ted’s Alex Winter and produced the pinnacle of cinematic rocket launcher-based deaths. The Golan-Globus years are probably the most well-known iterations of “Death Wish” and are certainly satisfying to watch with your brain turned off (a necessary act in order to gloss over the disturbing ideology that underpins the series); however, the Dino de Laurentiis-produced original is a more satisfying piece to watch in terms of narrative.

Much like Sylvester Stallone’s Rambo series, “Death Wish” is one that is often defined by its sequels, leaving unwitting viewers perhaps perplexed when viewing the first entry in the series. “Death Wish“ (1974, dir. Michael Winner) is not the death and explosion-filled action film like its successors; rather, the movie is an insightful piece of 1970s culture that lays bare the nihilistic backlash of the 1970s with regards to the counterculture movement of the late 1960s. 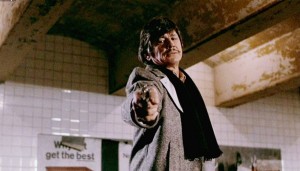 Let it be made clear that the worldview put forward by “Death Wish” is one that many may find uncomfortable, unpalatable, or downright disgusting in 2016; however, it seems as if the movie might be more relevant in today’s political climate than 15 years ago.  To explain, the film centers on Paul Kersey (Charles Bronson), a self-described bleeding-heart architect living in New York City. Shortly after returning from a Hawaiian vacation, Kersey’s wife is murdered and his daughter is raped by a roving band of thugs (notably led by a young Jeff Goldblum). Kersey is upset (although Bronson emotes about as well as a baked potato), but believes the police will bring him justice. How wrong he was.

Instead of helping Kersey, the police nominally promise to help him while admitting that they probably will never find out who committed the crime. Annoyed, Kersey slowly begins to think of taking the situation into his own hands, purchasing several rolls of quarters, stuffing them in a sock, and using them as a bludgeon.  The film wastes no time in giving Kersey an opportunity to test out his new invention as he is mugged seemingly the same night. After successfully defending himself, Kersey is disturbed by his own actions and flees the scene in a panic.

Now institutionalized because of her traumatic experience, Kersey’s daughter’s health and sanity continue to get worse, leading his annoying son-in-law to suggest she move away. At this point, Kersey goes to Tuscon, Arizona (confusingly described as a beautiful destination) to help his architecture firm develop property. Once there, Kersey is immersed in gun culture and returns with a .32 pistol given to him as a gift by his new friend Ames. This is the point at which the movie becomes difficult to watch when thinking about the underlying ideologies at play. 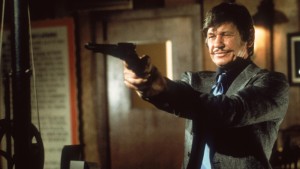 A prominent theme throughout the film is the characterization of cities as hellacious environments unfit for human habitation. The idyllic beaches of Hawaii are harshly juxtaposed with the gridlock and claustrophobic environs of New York City.  The city is little more than a playground for roving bands of young men looking to steal, vandalize, and rape with the film portraying the hoodlums as barely above animals. There is no attempt to look at the structural and systemic reasons for crime or poverty in the film; it simply exists as a menace. Instead, the film creates a caricature at best and stokes racist and classist flames at worst.

Nowhere is this more clear than when “Death Wish” drops its pretense of being color-blind towards crime and begins focusing on mostly black and Latino hoodlums (the first handful of muggers are white).  To expand on this, Kersey becomes a folk hero for fighting back against the rampant crime of the city, earning front-page newspaper and magazine coverage. As he grows more confident, Kersey begins seeking out criminals, often going to the poorer (and less white) boroughs of the city. There, what he does is little more than ritual murder. Upon being approached by a mugger, Kersey immediately fires his pistol at them, often injuring them with the first shot then executing the wounded man with follow-ups. This type of execution is not derided by the film; in fact, it is not even questioned.

Eventually, the police realize they need to stop the vigilante and are portrayed in a relatively negative light for doing so. Instead of stopping crime, they are more interested in upholding the law and due process, the film seems to inveigh. Moreover, the district attorney and mayor lean on the police chief to force him to “scare” Kersey into stopping so that they do not have a martyr on their hands. The film is very much in the “Dirty Harry” (1971) tradition.

Despite the film’s abhorrent ideology, “Death Wish” is still an enjoyable piece of cinema, certainly less exploitative than its immediate sequel (also directed by Michael Winner). Charles Bronson is a perfect fit for the stoic, initially-reluctant (anti)hero and Herbie Hancock’s score is delightfully 1970s. As a piece of historical sociology for the era which fomented the rise of Reaganism, “Death Wish” deserves to be seen at least once, if for no other reason than to gain insight into the ways in which certain strata of society view their fellow humans.