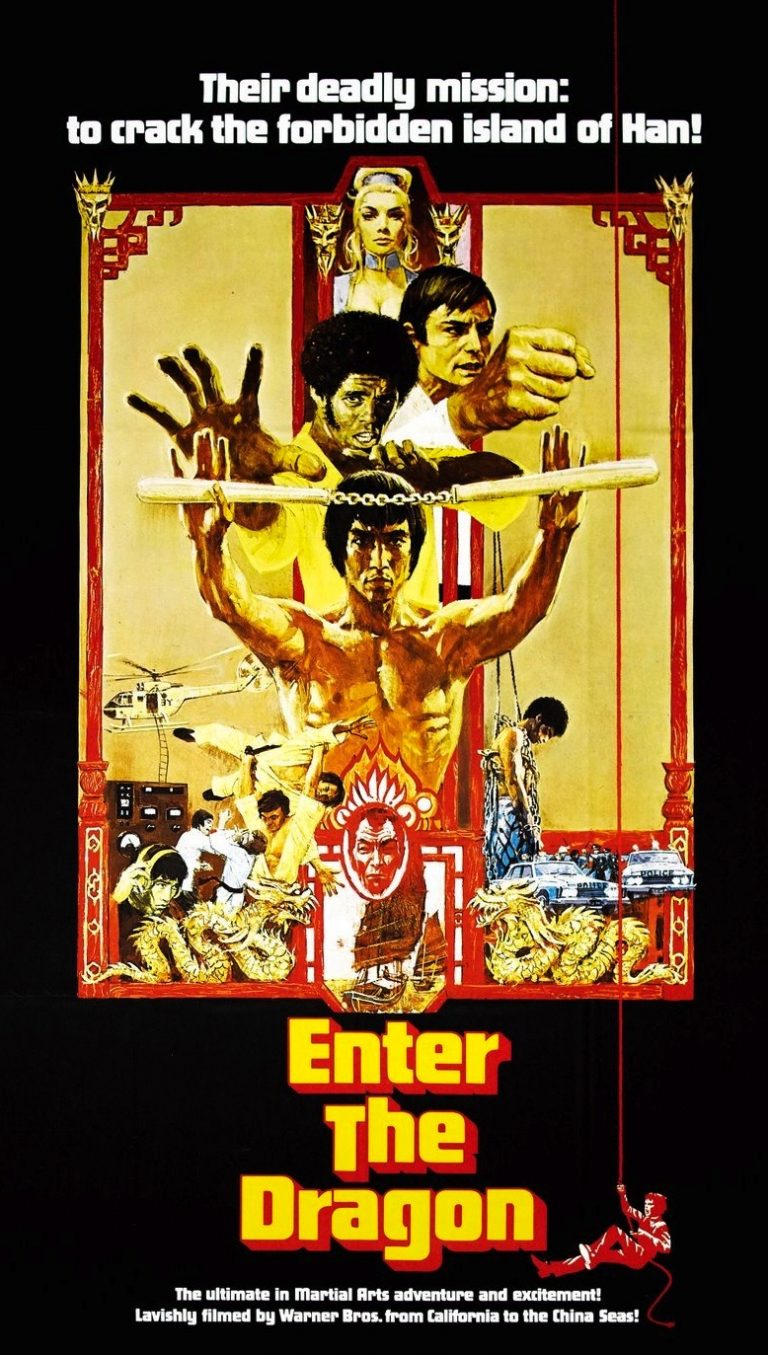 In a sense, Bruce Lee is similar to James Dean.  Both men have penetrated the collective unconscious of American pop culture in a way that far outstrips their actual cinematic output.  Whereas Dean is known for his brooding, teenage antiheroes, Lee is perhaps the consummate martial artist for American audiences and nowhere better was his legend established than with the Hollywood-produced, “Enter the Dragon (1973).”

The film focuses on Lee, played by Bruce Lee (creative naming), who is tasked by an unnamed international agency, as well as his dojo master, to investigate the mysterious Mr. Han (Shih Kien).  Dr. Han has acquired an island in disputed international waters which means he is under no clear (inter)national jurisdiction and can therefore do as he pleases. On the island, he has built a veritable fortress and is hosting a martial arts tournament for reasons which are never really explained in the film. While that is not much of a setup for a story, it is enough to establish a narrative framework into which a variety of fight sequences can be inserted. And really, that is why people watch the film.

As the first Hong Kong-style martial arts film made in Hollywood, “Enter the Dragon” has historical value in addition to its entertainment. While the film is certainly marked with the imprimatur of Lee, it is also indicative of how American audiences conceived of martial arts films (colloquially known as ‘chop-socky’ movies in the 70s) and what they expected from the movies. The film is set in Hong Kong and shows off the majesty of both the territory and Chinese culture in general; however, at times the movie feels like it is cramming in every trope of ancient China in an effort to tell the viewer “Hey, this is authentically Chinese!,” particularly the banquet scene which looks like it takes place in the era of the Three Kingdoms. However, these are not criticisms of the film; rather, they seem to be markers of Chinese-ness for American viewers, such that they would understand the film as authentic.

Contrapuntally, the film also feels very much like an iteration of the James Bond franchise. Lee is essentially an undercover agent and, when not dressed in his martial arts gear, wears stylish suits that would fit right in with the wardrobe of Sean Connery or Roger Moore (incidentally, Lee’s white American counterpart in the film looks an awful lot like Connery). Mr. Han also is essentially a Bond villain and, at one point in the film, carries around a white cat while threatening Roper (John Saxon, the aforementioned Connery lookalike) wearing black leather gloves. Interestingly, however, there is no real love interest for Lee. The film feints that there might be a female informant who comes to his room late at night, but Lee is strictly there for the information. However, “Enter the Dragon” does take advantage of the recently-removed American production code by showing brief nudity on screen, perhaps a decision which speaks to the conventions introduced by the New Hollywood movement.

While the nudity lacks purpose, it fits in well with the film as a whole, as many components of “Enter the Dragon” do not hold up upon further scrutiny. For instance, the character of Williams (Jim Kelly) is an entirely welcome addition to the film, yet the only narrative function he seems to serve is to indicate to Roper just how untrustworthy Mr. Han is. However, thinking about the film as an historical document, Williams’ purpose becomes clearer. More specifically, Hong Kong martial arts movies were incredibly popular with inner city audiences; at the same time, blaxsploitation films were on the come up.

Thus, it is not difficult to see why Williams, the character which really launched Kelly’s career as an Afro-martial artist, is in the film. “Enter the Dragon” also helped launch the careers of several other martial artists, including Sammo Hung, Jackie Chan, and Yuen Biao who were members of the stunt team that did much of the work on the film (Jackie Chan actually appears in the film as a guard who has his neck unceremoniously snapped by Lee). Furthermore, the inclusion of Bolo Yeung (perhaps more famously known for his role as a villain in Jean Claude Van Damme movies) is a personal favorite, as the man is the visual definition of a heel.

Bruce Lee died from a swollen brain before “Enter the Dragon” was released to audiences. Despite the tragedy, the film has gone on to become one of the most iconic martial arts movies both in America and throughout the world. Lee’s lean, muscular body is on full display in the film and his martial arts prowess is world class. The fight sequences are scripted almost to perfection and it is hard to imagine anyone not at least enjoying themselves while watching “Enter the Dragon,” crash zooms, high pitched grunting, and all.