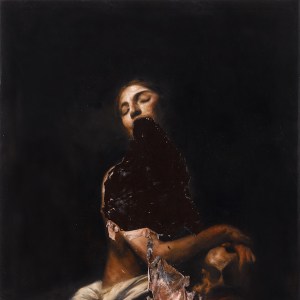 From its decidedly “metal” sounding album title to its genuinely dark and brooding atmosphere, The Veils’ ‘Total Depravity’ is a near-perfect foray into what makes an indie folk release more than just thin vocals and mildly catchy arrangements. While the likes of Arcade Fire have visited the same territories before, The Veils have taken the introspective sounds of their forebearers into incredibly satisfying territories.

With co-production handled by the magnificent El-P, and songwriting that is utterly arresting in its grip on the listener, there isn’t much about this record that leaves room for improvement. The band have been around since 2004, releasing albums on 2-3 year cycles whilst continually building up to their potential. ‘Total Depravity’ takes everything that’s right about the standard tropes in their genre and mixes in a surprising amount of outer influence in segments that range from sounding like trip hop to shoegaze. A band like Slowdive come to mind in this instance, where The Veils have summoned the ethereal rhythms and floating melodies that can make music such an intimate experience. Indeed, they have ultimately captured what most veteran music-seekers are pining for in realms of originality, familiarity, surprises and intensity.

What The Veils have seemingly discovered on this release is a higher propensity for hooks in the songwriting that slowly morph into dynamic relationships across the album. The lyricism is appropriately thoughtful, the instrumentation composed in tandem but unafraid to drift and flow in its own rights. While this record may be unfortunately undercovered and rather obscure for the time being, it will no doubt be held in high regard in the years to come and could well mark the discovery of their ultimate potential.

Recommended If You Like: Neutral Milk Hotel, Arcade Fire, Slowdive
Recommended Tracks: Axolotl, A Bit on the Side, Swimming with the Crocodiles, House of Spirits, Do Your Bones Glow at Night?, Total Depravity
Do Not Play: None
Written by Connor Janzen on 09/07/2016