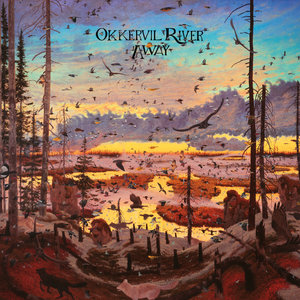 Will Sheff is the only original member of Okkervil River, and at this point, he basically IS Okkervil River. He wrote all of the songs on Away more or less by himself after a particularly bad rough patch in his life. He then asked friends, new and old, to contribute to the album. The result is a relatively sparse album, even while being full of outside jazz and classical influences to the band’s indie rock and folk sound. Away is the band’s darkest release since 2005’s Black Sheep Boy.

However, Okkervil River has always been a band that has dealt with darkness. Even when their songs sound upbeat or poppy, the band’s lyrics deal with darker subject matter, and the darker subject matter is often accentuated by Sheff’s mournful drawl (think of a Southern Robert Smith). However, the darkness they explore has often taken on different manifestations. Whereas 2005’s Black Sheep Boy was an angry, cynical darkness, Away sounds like the spiritual darkness of mourning the loss of someone or something. If this wasn’t any more obvious, the first track of Away is entitled “Okkervil River R.I.P.”

But Sheff isn’t mourning the loss of someone, he’s mourning the loss of part of his life. In Sheff’s statement about the album, he said he “realized [that he] was kind of writing a death story for a part of [his] life that had, buried inside of it, a path [he] could follow that might let me go somewhere new.”

More specifically, Sheff mourns his past relationships: with the music industry, with a significant other, with his influential grandfather, and with his own band. This is reflected in the lyrics throughout the album.

This is Okkervil River’s emotionally strongest album since Black Sheep Boy, and overall, one of their best.

Recommended If You Like: Shearwater, My Morning Jacket, Blitzen Trapper, The Decemberists, The Mountain Goats, Wilco, Wovenhand
Recommended Tracks: 1 (Okkervil River R.I.P.), 4 (Comes Indiana Through The Smoke),
Do Not Play: 3 (The Industry)
Written by Josh Gaston on 10/10/2016