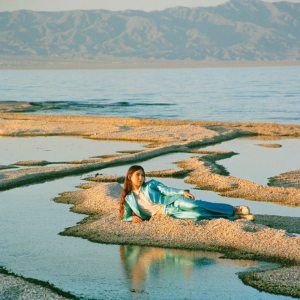 Weyes Blood, AKA Natalie Mering, carries the sound she has created with her previous album, The Innocents, but progresses forward with increased amounts of instrumentation and overall production. Front Row Seat To Earth is “folk music of the near future” as she describes it herself on her Bandcamp page. As a huge fan of folk music, I would say this is a pretty accurate way to describe the album. The music is rooted in folk styles of the 1970s, while remaining modern, similar to the earlier works of both St. Vincent and Angel Olsen. Every time I listen to it, Joni Mitchell’s classic, Ladies of the Canyon, always pops into my head.

The album opens with “Diary”, a song about self-reflection that a person typically experiences when keeping a personal record of one’s thoughts and feelings. The tune is centered around piano and a beautiful singing voice, setting the mood for an overall chill and relaxing listening experience. My favorite track on the album, “Generation Why”, slowly builds until it reaches a blissful acoustic guitar track that carries throughout the remainder of the song. The lyrics are sad and beautiful, recognizing the power of change that we may experience during our lifetime. The album closes out with “Front Row Seat”, which sounds like someone took a snippet of an orchestra playing, and ran it through some sort of mild psychedelic filter to create a subtle sense of chaos that is both pleasant, and unsettling. As a whole, all nine tracks flow very nicely and never stray from the central “vibe” that is initially created starting from track one.

One thing to keep in mind when listening to the album is not to have prior expectations. As someone who is a newer fan of Weyes Blood, I had listened to the song “Suddenly” from Drugdealer’s new album, End of Comedy, which she is featured on, and I couldn’t help but expect Front Row Seat To Earth to be more upbeat and “groovy”. It’s important to note that this album is pretty low-tempo, vocally heavy, and is best when trying to relax or get some work done. I have found the album to be great to listen to while studying for exams. Overall, the album resonates with lots of emotion and is great for anyone looking to explore modern styles of folk music.

Recommended If You Like: Joni Mitchell, Angel Olsen, St. Vincent, Carole King
Recommended Tracks: 5 (Generation Why), 8 (Away Above), 3 (Be Free)
Do Not Play: none 🙂
Written by MacConnell Wilson on 10/27/2016