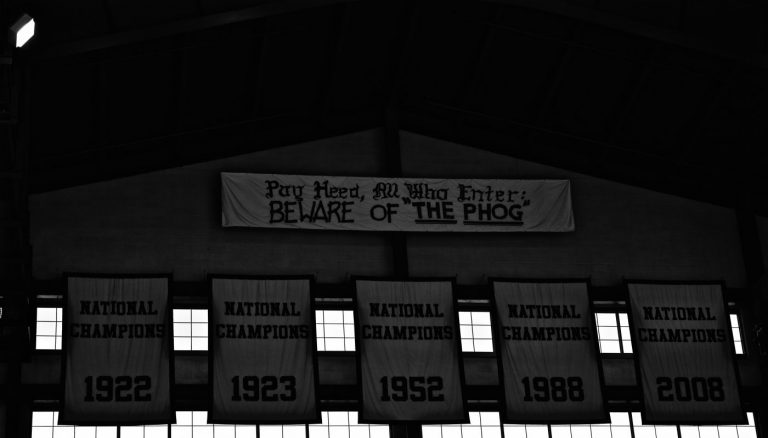 LAWRENCE, KS – In a season where the Kansas Jayhawks are returning 12 players that took the court last year for now 2nd year head coach Brandon Schneider, there looks to be plenty of room for growth with that group of returnees.

However, the story from KU’s 98-71 exhibition game win over Fort Hays State was the play of two transfers who made their Jayhawks debut on Sunday.

Jessica Washington, the junior transfer from North Carolina, and McKenzie Calvert, the sophomore transfer from USC, both shined in their first games in Jayhawk uniforms. KU will be looking to fill the large shoes of Lauren Aldridge at the guard position this season, as the best player on last year’s team surprised many by transferring to Missouri during the off-season.

Calvert and Washington got off to a good start in that regard on Sunday afternoon.

Washington looked smooth all day long at the point guard position, showing off her handling ability and scoring 15 points with 8 assists while adding 8 rebounds as well. The junior guard broke down the defense all game long, including a nice dribble move with 8:03 left in the 3rd quarter to maneuver into the paint, which ended in a nice touch pass to Caelynn Manning-Allen for an easy layup.

While Washington held down the point guard position, McKenzie Calvert was showing off her perimeter range. Calvert shot 3-7 from three point range, getting started early with a couple of makes in the first quarter. She finished the game with 18 points, adding 3 assists and 3 rebounds. Calvert was ultra-aggressive during the entirety of the game, which was on full display during a play in the 3rd quarter.

Calvert drove the lane and attempted a layup, missed it, got her own rebound, and put in her 2nd attempt.

Overall, the Jayhawks were in control most of the way, but there was some defensive breakdowns, especially in the 2nd quarter.

With KU leading 28-16 midway through the 2nd quarter following an Aisia Robertson layup, Fort Hays State went on a 10-0 run to cut the lead down to 2. Over that stretch, the Tigers made a couple of three pointers and got 5 points from freshman guard Taylor Rolfs, who lead FHSU in scoring with 12.

The run was finally halted in exciting fashion when junior guard Chayla Cheadle glided in for a contact layup, making the shot and the subsequent free throw.

Cheadle, who only shot 32% from the field a year ago, delivered a huge performance against the Tigers, scoring 18 points on 7-13 shooting, while adding 7 rebounds in 26 minutes.

Despite the halted run, Fort Hays State was able to keep it close going into halftime, with the score sitting at 37-31 after 2 quarters.

However, the Jayhawks would go on a huge run of their own to begin the 3rd quarter. The score quickly shifted from 37-31 to 50-31, as KU scored 13 unanswered points. The outburst all came from the trio of Calvert, Cheadle, and Manning-Allen, who only played 9 minutes because of foul trouble, but scored 6 points and grabbed 4 rebounds.

From that point forward, the Jayhawks were never threatened, as the lead never dipped below double digits for the remainder of the game en route to the 98-71 victory.

There were plenty of positives to take away from Sunday, but head coach Brandon Schneider was not happy with the effort on defense in the team’s first exhibition game, explaining post game that the team did not have a good “conversion” game, referring to getting back on defense after completing a possession on offense.

While many of the offensive woes from a year ago appear to have been addressed, it will sill be crucial for the Jayhawks to dig in defensively, especially as their schedule gets more difficult.

KU will conclude exhibition play next Sunday, November 6th at 1 PM against Washburn at Allen Fieldhouse.