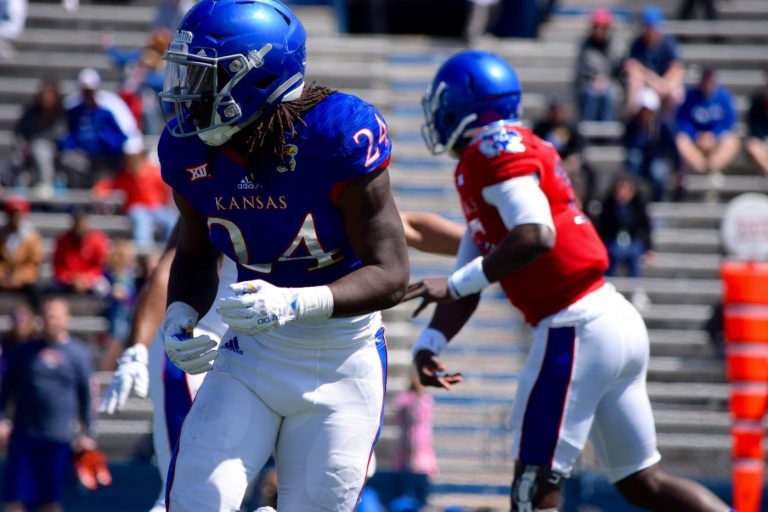 39 games. That is what the current KU road losing streak is up to after last week’s devastating loss in Norman to the Oklahoma Sooners.

The Jayhawks came out and looked competitive in the 1st quarter of that game, only trailing 7-3 after 15 minutes. But it was all downhill from there, and Oklahoma cruised to an easy 56-3 victory.

This week, the Jayhawks travel to Morgantown, West Virginia for a matchup with the Mountaineers, a team who is coming off its first loss of the season to Oklahoma State.

This figures to be an extremely tough matchup for the Jayhawks, as they will be facing arguably the best defense the Big 12 has to offer. WVU allows only 20.6 points per game to their opponents.

This West Virginia team is different from years past, however. The biggest change is the way in which the offense now operates. Gone is the up tempo, air raid style offense we have seen in previous years, and in is a slightly slower, more balanced run/pass attack led by quarterback Skylar Howard and running back Rushel Shell.

West Virginia scores 31.1 points per game while gaining 290.4 yards per game through the air and 206.9 on the ground.

KU’s defense came out strong against Oklahoma, and actually did a fairly admirable job for the early parts of the game, until their own stagnant offense forcing them to be on the field quite often proved far too much for the stamina of the young KU defense.

KU was still able to defend the pass fairly well, allowing outstanding OU quarterback Baker Mayfield only 236 yards through the air. The rushing defense continues to be the Achilles’ heel of this team, however, as KU conceded 267 yards on the ground.

This aspect of the defense will be thoroughly tested by the vaunted West Virginia rushing attack.

Ultimately, KU is expected to lose, and lose badly. They come into this game as 34 point underdogs. If the Jayhawks wish to pull off the massive upset in Morgantown, they will have to string together multiple scoring drives on offense to keep the defense fresh, avoid turning the ball over multiple times, and defensively, they must stop Shell and the dangerous West Virginia rushing attack.

If not, then this long road losing streak will be extended to 40, and the KU woes overall will only be magnified.