When promoting for Farmer’s Ball, many questions get asked: do I study agriculture? Is it a farmer’s market? Is it a dance for people that met on FarmersOnly? The answer to all of these questions is no.

Farmer’s Ball is the annual battle of the bands put on by KJHK and SUA held at the Bottleneck each spring semester. The process first begins when bands in the area submit their music to the station. From there, members of various committees rate the artists, and the top sixteen make it to the online rounds where the public votes for their top eight. From there, it’s time for the live semi-final round! 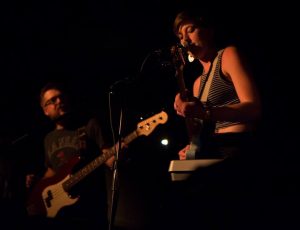 This year, the crowd was in for a real treat. All eight acts offered something different and unique whether it was a genre, stage presence, or fresh produce. The set times were chosen at random and each band had thirty minutes to perform.

The first performer of the year was solo vocalist Kat King who gave a solid performance accompanied by her full band. The songwriter showed her versatility through her vocals and her ability to play multiple instruments. The whole time she was poised and confident. Her lyrics exhibited maturity and the crowd seemed to love her.

The next act of the night goes by the name Goodbye Gravity, who had 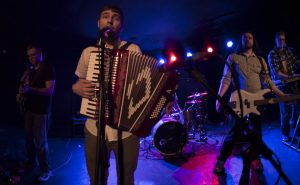 a very special and memorable performance. The indie-pop band played a variety of tunes some spooky some groovy. The accompaniment of the accordion played by the frontman, Brian Locascio was the perfect touch. The whole set the band was on stage it seemed as if they were having the time of their life. It probably helped that it was Locascio ‘s 21st birthday.

The three-man band, Pale Tongue, played a hell of a set. Hearing about them or listening to them on the radio is no match for seeing the trio live. The psychedelic sounds filled the bottleneck and urged the crowd to move along. 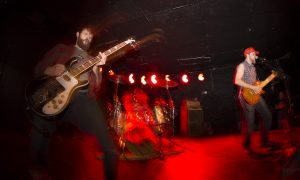 Ricky Roosevelt according to several sources was “lit”. His lyrics were very sharp and clear. His mobility throughout the set got the crowd hyped as he bounced and placed all around the stage. Fellow Vivid Zebra collective member, alccalh DJed and provided dreamy beats and brought things together.

Gnarly Davidson blew it out of the water. For starters, they brought a box full fresh produce which had the crowd munching on apples, carrots and more while they flung their limbs around and moshed to each of their songs. The experienced rockers put on a high energy set of self-dubbed “beer-rock” that was welcomed with open arms by the crowd. 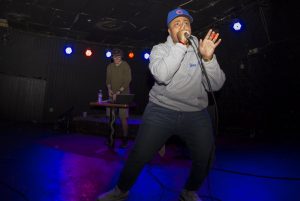 Cuee was hype. From the start, she interacted with the audience and even jumped down to perform amongst them.  The hip-hop artist and songwriter kept the set upbeat and the crowd bumping throughout. During her set, she had a variety of guests including DJ Shane Blair and backup dancers which made everything all the more appealing.

Changing the rhythm up was Robotic Animal Band. Their soft indie rock sound proved perfect for dancing and grooving which many craved after the previous heavier sets. Their set was soothing and extremely enjoyable and foreshadows the great things that are to come for the newcomer group from Lawrence. 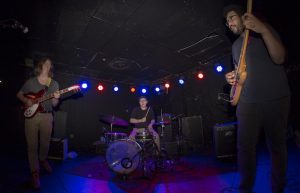 The final band of the night, Hush Machine, was added to the Farmer’s Ball roster after Momma’s Boy wasn’t able to perform due to scheduling conflicts, and boy did they rock it. The new wave rock trio made up of Sam Boatright, Nicholas Stahl and Pale Tongue’s Carlos Calderon put on a great spectacle and proved that they deserved to be there.

The Finals took place the following Saturday, April 15th at the Bottleneck at 9pm. The four bands competing for the $2,000 grand price were:

Pale Tongue was the first to perform at the finals, known as the hardest position to perform in. But they were able to overcome the challenges by drawing in a big crowd shortly before their set began. The energy they brought along with trippy lights made the psychedelic trio relished by the crowd. 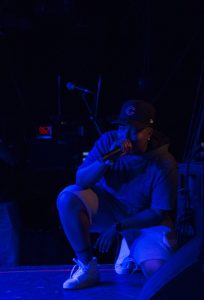 Cuee began her set opposite the stage by the sound booth. A few moments after the music began, she made her way to the stage as the masses parted way for her. Those sitting around immediately got up and joined the crowd ready to be a part of it all. Cuee brought back some dancers and kept the cheering going long after she was gone.

Hush Machine was in it to win it from the start. Their sound was smooth and had the crowd dancing along the entire time. Catchy lyrics and melodies had the crowd and swaying and the good vibes flowing.

Gnarly Davidson took it all home. They brought another box of produce with a greater variety this time and thrashed on stage as ball-goers threw themselves and others around below them. The local favorite gave an even better performance that at the semi’s and they have the title to prove it.

Both events ran smoothly and brought in a great crowd that was ready to emerge themselves the local music the event had to offer.

Check out photos galleries from both nights here.