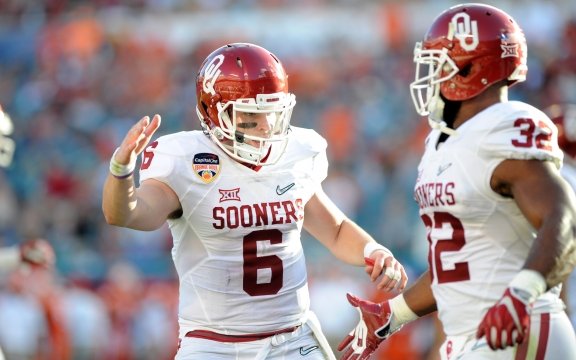 Kansas gets smacked by Oklahoma

The Jayhawks’ last home football game this Saturday began with team captains Joe Dineen Jr., Daniel Wise and Dorance Armstrong Jr. refusing to shake Oklahoma quarterback Baker Mayfield’s hand. After that, Armstrong and Mayfield had to be physically separated by referees after the coin toss. From there, the game continued to be charged up and heated until the end.

The Jayhawks put up a fight against the Sooners but eventually lost 41-3.

In the very first drive of the game, the Jayhawks’ defense had a near interception, but dropped it. Soon after, Oklahoma running back Rodney Anderson caught a 34-yard pass from Mayfield and scored a touchdown.

The Jayhawks started off the game with incomplete passes and an abysmal offense performance. Kansas quarterback Carter Stanley began the second quarter with a 7-yard rush followed by an incomplete pass to Chase Harrell. Kicker Gabriel Rui then scored a field goal at 14:17 from the 23-yard line, making the score 7-3.

Kansas had a rough offensive performance in the first half, with multiple incomplete passes. Defense was fairly strong throughout the first half, trying to control Oklahoma’s incredible offense.

In the first half, Stanley consistently delivered incomplete passes, allowing Oklahoma to take a good lead. Mayfield was only 7 of 13 for 105 yards in the first half with two touchdowns.

With 40 seconds left in the second quarter, Mayfield completed a 24-yard pass to wide receiver Marquise Brown. Oklahoma ended the half leading 21-3.

For the most part in the first half, Kansas defense competed with Oklahoma. However, they ended the half down by 18 points and struggled with offensive plays.

Starting off the third quarter, the Jayhawks struggled to rush down the field. Stanley continued to make incomplete passes, a continuity from the first half.

Mayfield lost 4 yards when Armstrong got his first sack of the game, 9:45 remaining in the third quarter. But Anderson fought back with a 16-yard rush and got tackled by Joe Dineen. Next, kicker Austin Seibert punted 37 yards with a catch by Steven Sims Jr. at 8:54 left.

The Jayhawks did not keep the ball long when they punted it back to the Sooners with 7:55 left.

At 13:58 in the fourth quarter, Seibert completed another field goal, changing the score to 31-3.

Following that, Oklahoma running back Trey Sermon rushed for a 25-yard touchdown with 12:09 left in the fourth quarter. The score became 38-3.

While Oklahoma played fairly strong throughout the game, it seemed like a step back for Mayfield. He is seen as the probable Heisman winner, but started off much slower than his outstanding turnouts in the games against TCU (333 passing yards) and OSU (598 passing yards) in the past two weeks. He ended the game 20 of 30 with 257 yards and 3 touchdowns.

For the Heisman, Mayfield will be up against players like Stanford’s running back Bryce Love, Arizona’s quarterback Khalil Tate and Louisville’s quarterback Lamar Jackson.

Next Saturday, Kansas will travel to Stillwater, Oklahoma to face the Oklahoma State Cowboys, who lost 45-40 at home to Kansas State this week.