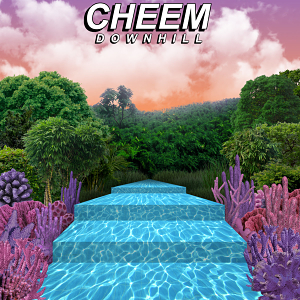 On first listen, Cheem’s new release is a beautiful disaster. Each song is a cacophonous amalgamation of genre-bending elements; but somehow, this organized chaos works. Drawing influence from emo-pop, math rock, and more mainstream alternative (among other sounds), Downhill is an unceasingly upbeat record that makes sitting still very hard.

Cheem is a group of five from Connecticut. Members include Sam Nazaretian on vocals, Skye Holden on vocals and guitar, Gabriel Weitzman on guitar, Sean Thomas on drums, and RJ Briggs on bass. The ensemble is relatively young, and the whimsical adolescence is evident in the aesthetic of the entire album, especially in its packaging. The cover art is surrealist and can best be described as “naturewave,” quite an interesting complement to the style of music.

Listening to Downhill is a bit nostalgic; the sound evokes pleasant memories of bands the likes of Simple Plan and Jimmy Eat World. It’s a flashback to the glory days of the early 2000’s, but not without an overall sensation of modernity. The impressive instrumentation and dual-lead vocal approach only enhances the overall experience.

To its discredit, many of the songs on the album sound almost indistinguishable initially—though this ambiguity makes for excellent background music. These are tracks that must be listened to several times to fully recognize and appreciate their musical nuances. Nevertheless, Downhill shows clear compositional maturation from Cheem’s previous record, “Making a Planet.” If this trend continues, the group has immense potential in future albums.