Following their win over the Iowa State Cyclones, the Jayhawks hosted the 20th ranked West Virginia Mountaineers. This game was the second meeting between the two teams this year.

In their first matchup, KU overcame a 16-point deficit to defeat WVU in Morgantown.

In yesterday’s contest, seven-footer Udoka Azubuike had one of the best games of his career. Azubuike got it done on both ends of the floor finishing with a team-leading 21-points to go along with his three blocks and two steals. Azubuike also looked much-improved from the free throw line where he managed to sink seven of 10.

The Jayhawks did have trouble stopping Senior Guard Daxter Miles Jr. Miles, as he made shot after shot for the Mountaineers and finished with a game-high 22-points on an impressive six of nine shooting from three-point range. 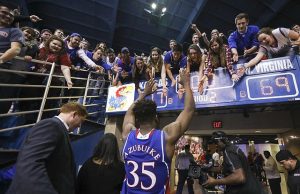 Udoka Azubuike (35) receives high-fives from KU fans as he exits the court after KU’s win over West Virginia.

A big story of the game was how conservative the Mountaineers started playing when they began to pull away. With about eight minutes left in the game and up double digits, West Virginia started to chew clock, oftentimes settling for an outside jumper late in the shot clock.

Another noteworthy storyline was the free throw discrepancy that largely favored the Jayhawks. KU ended up shooting 35 free throws, whereas the Mountaineers shot only two.

With only 12 seconds left in the game following a Udoka Azubuike block and Malik Newman lay in, West Virginia Coach Bob Huggins received a double technical and was ejected from the game for yelling at a referee.

After the game, Huggins expressed his frustration with the officiating stating: “I’ve been doing this for 40 years and I don’t think I’ve ever been in a game where we shot two free throws.”

KU finished the game on a 19-3 run capping off an impressive 77-69 win over the Mountaineers. This game marks the third straight time West Virginia has lost to the Jayhawks after having a double-digit lead.

KU is now in a familiar sport, again tied for first place in the conference with Texas Tech, following the Red Raiders’ loss at Baylor Saturday night.

Up next the Jayhawks will host the No. 23 ranked Oklahoma Sooners who are led by Freshman Phenom Trae Young.