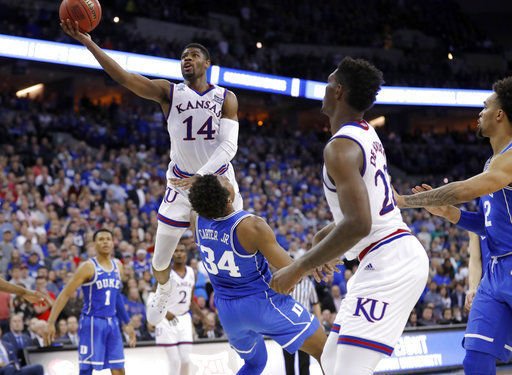 Going into a matchup between two blue blood, historic programs, the expectations were for an exciting game.

The end product was something that nobody (except apparently Jesse Newell of the Kansas City Star) saw coming.

Kansas defeated Duke 85-81 in overtime in the Elite Eight to move on to San Antonio and the Final Four. Just looking at that stat line, it looks like it was an exciting, close match-up. However, there is so much more to unpack.

First, there is redshirt sophomore guard Malik Newman who has been on an offensive hot streak as of late. Newman was expected to have a big game and even potentially be the key difference between a forward-centric Duke team and a guard-centric Kansas team.

Surprisingly, Newman was cold for most of the first half, shooting 2-for-8 from the field and 0-for-3 from three-point range, with just six points.

The second half was a completely different story, as he scored 13 points on 4-for-9 shooting and hitting three, three-pointers. He also came up clutch in overtime, scoring every basket in the extra period for Kansas, bringing his total on the day to 32 points.

Newman was simply incredible in this game and Kansas doesn’t win without him. He was also named the Midwest Regional Most Outstanding Player to boot.

Another huge talking point for this game was the rebounding battle and the overall “problem” of stopping All-American freshman forward Marvin Bagley III.

The other key Duke forward was freshman Wendell Carter, Jr. who ended up fouling out with 2:49 to go in overtime. Carter finished with 10 points and two rebounds, both well below his season averages.

Kansas also did this all with sophomore Udoka Azubuike fouling out with 1:59 left in the second half, which makes the resilience and effort of both Mykhailiuk and freshman forward Silvio De Sousa defensively that much more impressive.

The overall rebounding battle was won by Kansas 47-32 a feat that nobody thought would be possible, let alone by 15.

Coach Bill Self thought this was the “best we’ve been on the glass all season,” which makes sense when you look at those numbers.

But if you look at the bigger picture, this game will be remembered for a few moments amidst the back-and-forth play between these two quality teams.

The biggest moment of course being Mykhailiuk’s three-pointer with 26 seconds to play in regulation.

The Jayhawks were trailing 72-69 with 36 seconds left. In some situations, a team may go for the tough drive inside, looking for a foul or an easy basket, then play the foul game.

Instead, Mykhailiuk made what will go down in Kansas lore as one of the biggest shots in Jayhawks basketball history.

Mykahiliuk sank the shot, sending CenturyLink Center in Omaha, Nebraska into a frenzy, with neither side quite comprehending immediately what just happened.

Duke attempted to respond as senior guard Grayson Allen charged down the court, had a great look and put up a floater that almost sank Kansas’ fans hopes and dreams. The shot hit the rim, backboard and rim again in succession but failed to go through the net, sending the game to overtime.

This game was filled with emotion and exceeded all expectation of what it was “supposed to be.” Kansas played sloppy at times, such as committing 18 turnovers, but the team stepped up when they needed to as they have all season.

This team has been doubted, counted out and sometimes seen as an afterthought when it comes to a Final Four bid let alone a national championship.

Now, those same Jayhawks that lost four home games are two wins away from cutting down the nets in San Antonio, a place that treated them well 10 years ago.

Kansas is and has always been a dangerous team because Self is a master at in-game adjustments and the team is so willing to do whatever it takes to win.

That is a dangerous combination that was on full display Sunday night, and something Villanova should look out for come next game.