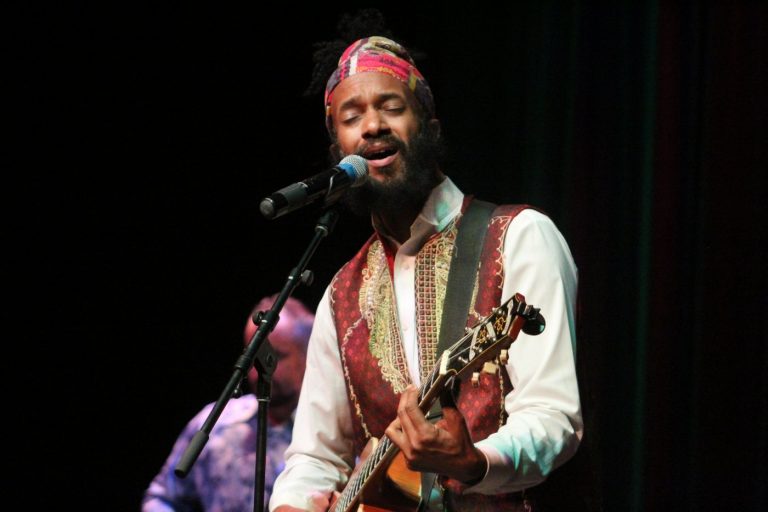 As part of the week-long Free State Festival here in Lawrence, Fantastic Negrito dropped by the Lawrence Arts Center this past Saturday. Before experiencing this show, I was at a loss of what to expect. I had never 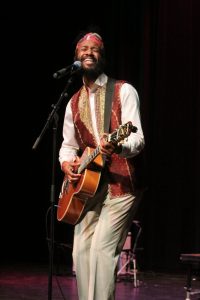 heard of him or his music prior to that night and was going in completely ear-blind. As I waited for the band to start I took in the set-up of the stage. There were no backdrops or banners, nothing giving any insight to what this artist would be like or sound like, nothing. Little did I know how much the lack of design would tell me about him.

To say that I was surprised would be an understatement. I was definitely not expecting the rough tone and immense energy that came with the jazzy-rock sound, if I can even call it that. That being said, it was not really my style of music. As someone who is much more into the harsh guitar riffs and intense vocals, the music was a bit slow paced for me. Execution wise, the music was as flawless as you could hope for, it’s just not something I would personally listen to on my daily commutes or when I had down time. The performance of this music though was much more enjoyable for me. I have a massive amount of respect for any musician that can move their audience in a seated and intimate setting. Fantastic Negrito had no problem achieving that. There was not a moment that I wasn’t entranced by the expressions of the members. Facial expressions during guitar and drum 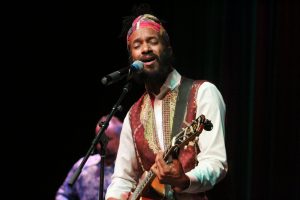 solos or long falsetto notes were extremely contagious to the audience, including me. It was one of the most emotionally transparent shows I have experienced yet, and I have been to a lot of shows. The emotional pull of this artist was again embodied at the end of his show, when approximately 30 of his audience members left their seats and joined the band on the floor to dance along with his closing songs.

As I left that night, I was happy to hear the all too familiar ringing in my ears and to see the raw photos I was able to take from the show. As I said before, I went into this show completely oblivious to what I would take from it. I was exposed to a new style that I hadn’t been able to experience before, and while it wasn’t my usual style, I still enjoyed myself and the true musicianship and artistry shown by Fantastic Negrito and his band. 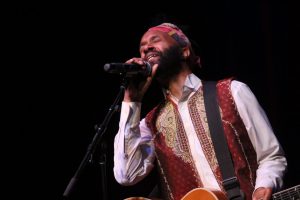 For the Free State Festivals final after party, they invited JC Brooks and the Uptown Sound to play at the Bottleneck. Going into this concert, I had very little idea of what this group sounded like, what type of performance they might put on, or how much fun I would have. I found out I was attending this concert just a few days before, and this time I decided to go without any expectations. I wanted to attend with absolutely no bias on what their sound would be. On the way there, I only listened to one of their songs, I Get High, off of their “Want More” album. This song, along with many others played to the crowd, was a huge hit. Their moves, the way they hit the high notes, and the way the crowd got off their feet and moving was a perfect example of how to put on a performance. 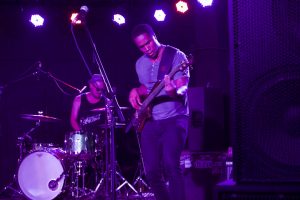 While the stage was bare and not decorated, it didn’t matter. The band’s personality made up for the lack of decor. Their infectious smiles and happy attitudes would have just been a distraction from any decoration they could have displayed. JC Brooks came out full force. He was loud, he was happy, and you could tell that more than anything, he wanted to be up on that stage singing his songs.  Before they began performing, he announced to the crowd “don’t be shy, come up and dance”. Him, the bassist, and the guitarist all had coordinated their dance moves throughout the song, and bounced all around the stage to the various beats of the song. This encouraged many of the people who had been previously sitting down to get out of their seats and start moving. Two older gentlemen were the hit of the crowd, leading us all with their impressive dance moves, and even stealing the show towards the end with their air guitars. The band on stage laughed and enjoyed watching the men dance, you could tell that they were happy to have such a happy and cheerful crowd. 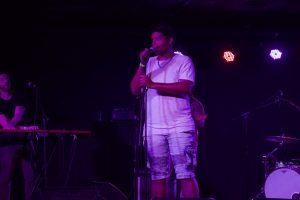 While the group was mostly ecstatic and joyful, they took some time to use their platform to talk about real issues that everyday people go through. They talked about mental health and how you need to reach out to your friends, because you never know what someone is going through. JC Brooks said “sometimes being annoyed is being cared for.” The band also used their music to talk about the racial tensions in America, their song Anywhere But America, addressed the fact that racial tensions keep getting higher. Seeing a group that was so fun and so exciting be able to take a moment to slow down and use their platform for the greater good, not thinking or caring about the outcome or possible consequences and truly just doing their own wants to express themselves, was refreshing.

JC Brooks and the Uptown Sound is a concert where everyone is welcome. You can either know nothing about the band, or be their biggest fan, and either way you will have the time of your life. They know how to put on a show, how to keep an audience entertained, and make themselves seem like a band of brothers, rather than friends. JC Brooks anxiously and excitedly announced that he would be waiting to meet us at the end of his concert and he would love to meet all of us. Thank you, JC and the band, for providing Lawrence with such an exciting first performance, and I hope you come back soon. 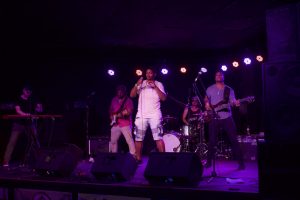