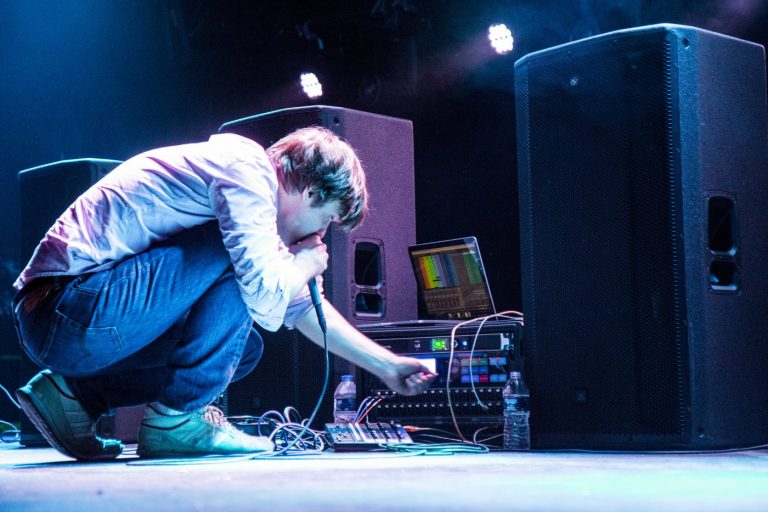 John Maus is an absolute treasure to experience live. He has been on my radar for the last two years, so I was thrilled when I heard he would be going on another tour for a couple dates around the country. I immediately bought my plane tickets to ensure this rare opportunity to catch this experimental synth-pop maniac in person and in my hometown of all places. This would be his first North American concert series since his brother and bassist Joseph passed away this past July. I don’t even know when I would have another chance to see him, so this date had to work out. 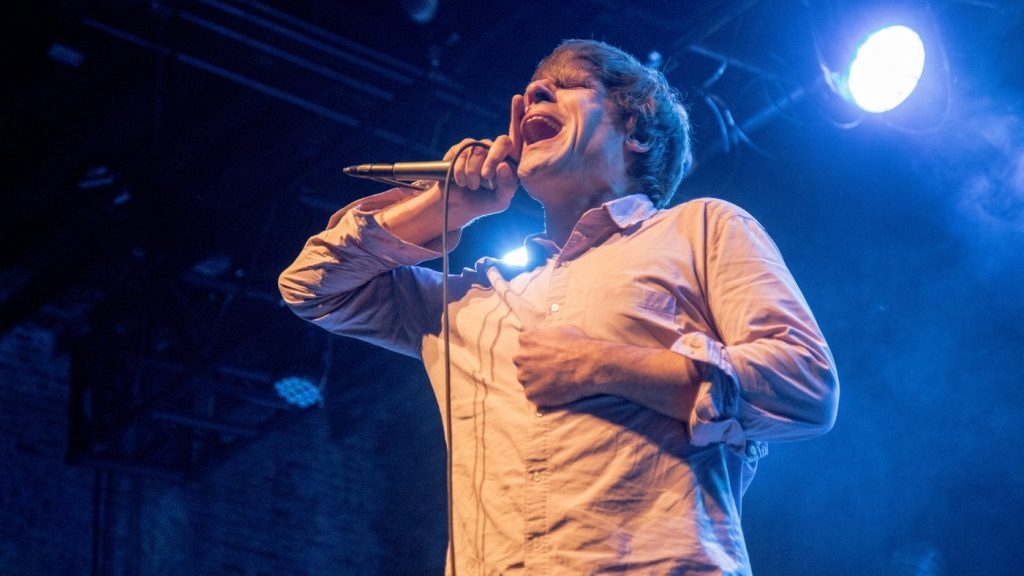 The former professor of philosophy at the University of Hawaii gained much of his experimental lofi-pop sound and growth through collaboration with college classmate Ariel Pink at the California Institute of the Arts. His lyrics are so intriguing and they accompany his 1980’s-reminiscent synth leads in a refreshing and imaginative fashion. His music covers a range of peculiar topics including killing cops, dumpster babies, eating humans, and pets dying. I saw few of his live performances and in-studios before, so I already knew of his odd performance techniques and composure on stage. However, it’s a different story when you see it from 5 feet away.

I arrived in Chicago the night of the show. I jumped out of my Uber and I walked up the street towards Thalia Hall. There was such a positive energy within the crowd circled outside of the venue, despite the harsh winter weather and the face-numbing breeze. The crowd was made of folks from all walks of life. Hipsters, misfits, outsiders, music fans and art fanatics seemed to be the base of Maus’ appeal in Chicago that night. There also seemed to be a strong presence from the LGBTQ community, reflecting one of Maus’ most popular anthems titled “Rights for Gays.” I walked into the venue alone with my camera in hand and ready to take it all in.

The warm up music cut out and the lights were positioned. Maus walked with a determined composure as he came out from the side stage. The crowd greeted him with a roaring welcome of cheers. He approached his computer and dove right into his first track of the night, 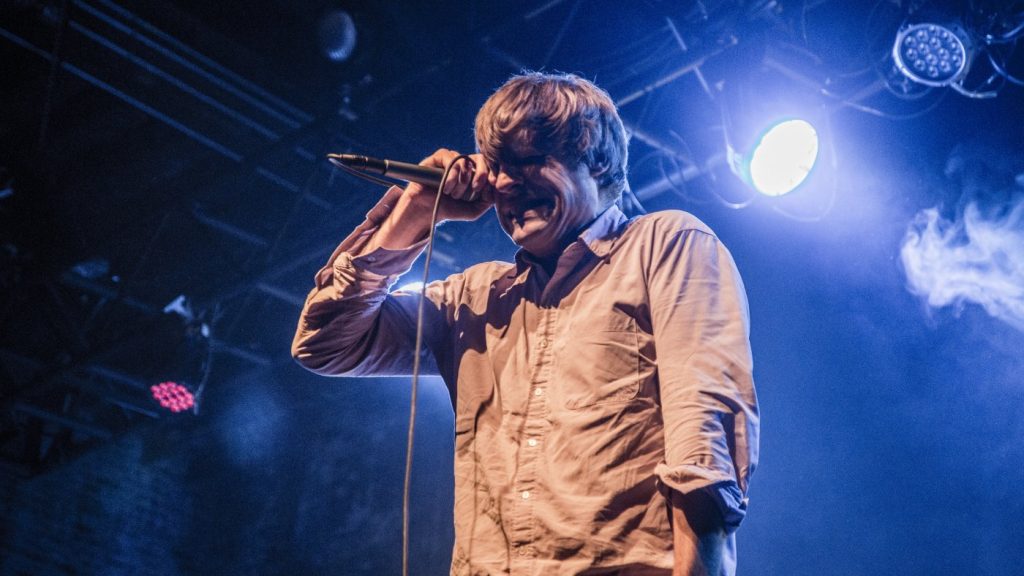 “My Whole World’s Coming Apart,” off of his sophomore album Love is Real. The cheeky bass line and slow-rising synth tone is the perfect way to start a John Maus show. Though he rarely even performs this track live, the song can be considered an honest vision to Maus’ current state of mind and reflects the last few months of chaos and change in his life. The lyrics in the track “Give me give me give me some love,” “And this is my nightmare,” and “Just have to wait till tomorrow,” really resonate with that idea. Maus began beating the mic to his chest and cried out to the crowd with a passionate roar that really initiated the character and heart of the show. John Maus is one of those artists that you can really feel authenticity and passion for in what he creates and shares. I realized this by seeing him perform just one song live. It’s captivating to see him put 100% of himself into a musical trance, seeming so far gone and unaware of the crowd at times. His next two songs “Castles in the Grave” and “The Combine” are great examples of Maus losing himself within his performance. The songs have less than 10 words apiece, yet Maus is singing almost the entire time on each of them. His tendency is to vocally execute the lead of his synths through his entire body with the use of delays and heavy reverb in his microphone. 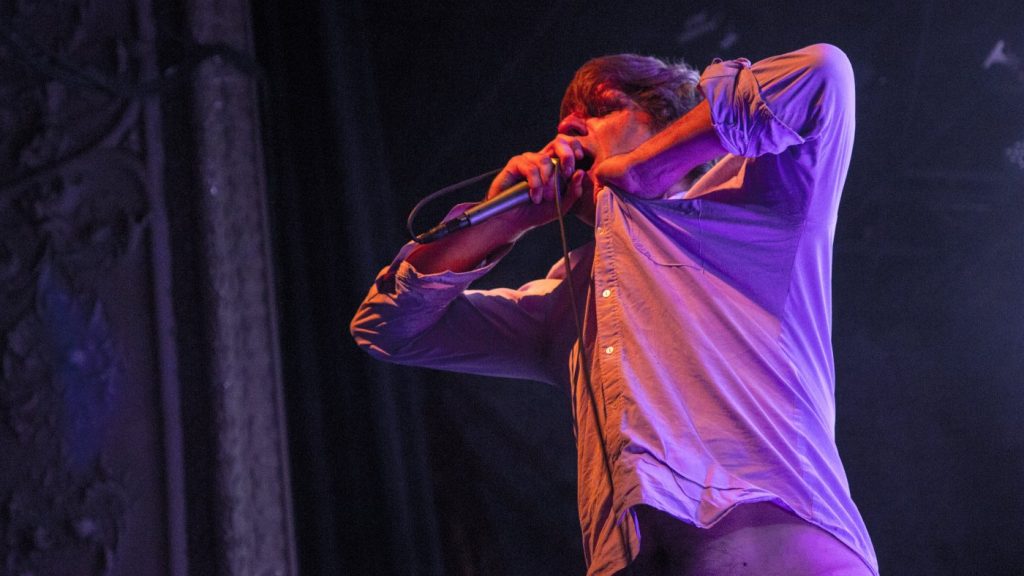 It’s an intimate experience. He’s engulfed in overhead flood lights and standing in front of 5 parallel amplifiers. You can really see how immersed he becomes in his own lyrics and ambient atmosphere. It almost seems as if he winces in pain with every chorus line, going through his previous memories and thought processes of a cosmic level. He was very physical throughout the entire concert. His constant pounding of fist-into-head hyped him up into this beast of a performance. He jumps up and down and runs back and forth between both sides of the stage, howling his lyrics as sweat drips off his head. Maus also implemented his famous head banging into the performance: a series of aggressive neck throwing, rhythmically and artistically executed along with the composition.

Towards the middle of the show, I found myself towards the back of the crowd, just taking in everything from the music and lyricism to the body language between Maus and the crowd. The atmosphere of Thalia Hall was beautiful that night. The crowd was attentive and completely wrapped in Maus’ presence, bouncing and singing along with every song. It was the first time I’ve been to a show where I didn’t see cell phones everywhere recording the artist. This crowd was here to see this emotional performance and live in the moment of the night. It only added to the aesthetic of Thalia Hall’s charm and vintage feel, accompanied by Maus’ sentimental echoes and ambient tones.

Maus did not play much off of his new album Addendum, but I believe this was a conscious decision for this tour. He played many of his classics like “Maniac,” “Keep Pushing On,” and of course, “Bennington.” He played some songs that he usually no longer performs live. He ended the night with an encore of two beautifully melancholy songs: “Do Your Best” and “Believer,” songs that would work too perfectly within a school dance scene in a 1980s film.

I cannot stress enough how striking this performance was. Going alone made it all the more personal and touching. It allowed me to absorb his presence and music with a more intimate viewpoint. It is very rare that a concert can move me to the point of tears but this show was something else. I don’t know if it was the whiskey that was getting to me, but goddamn I was really feeling sentimental for most of that show. I felt the way I did because of his raw performance. He was genuine. He put himself out there, just like he does at every show and that is such a contagious gesture. When he opens up, I feel like I can let go. All I can say is thank you, John Maus, for an incredible time that I won’t soon forget. 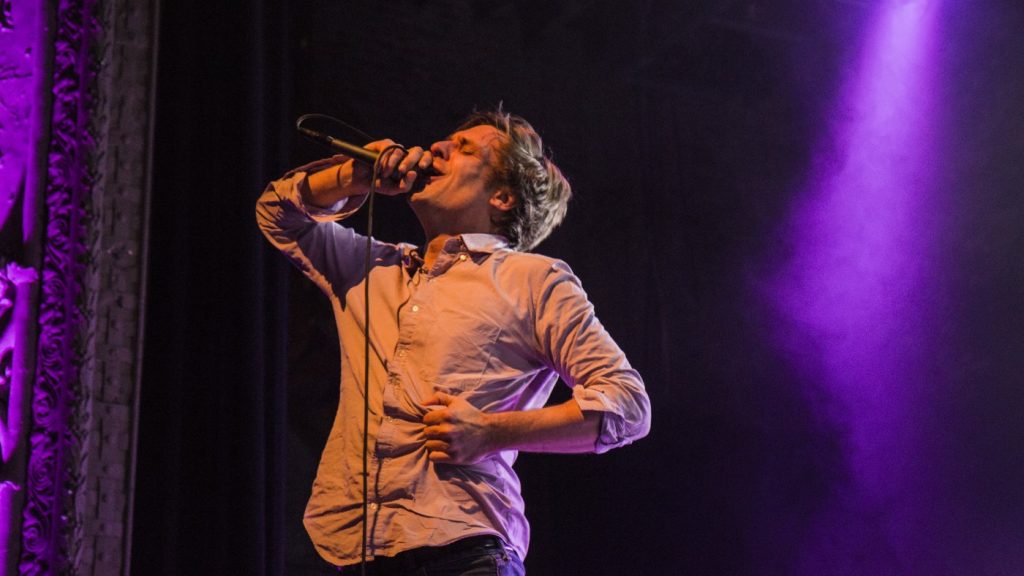