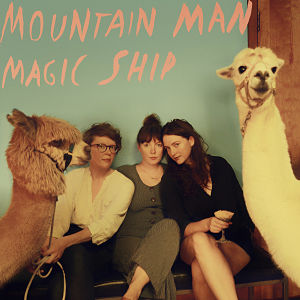 In this modern age of music, artists have more recording tools and tricks at their disposal than ever before. The sounds of many groups find definition in volume, instrumental layering, and even computer effects. But in many cases, the simplest arrangements are the most extraordinary. Such is the case in the three-member folk outfit Mountain Man’s sophomore album, Magic Ship.

Composed of Amelia Meath, Molly Erin Sarlé, and Alexandra Sauser-Monnig, Mountain Man formed when the three women met in college. According to the band’s website, the members barely knew each other when they began performing and recording; however, a growing friendship in the years during and after the recording of debut album Made the Harbor would prove essential to the group’s longevity.

There has been an eight-year gap between the release of Made the Harbor and Magic Ship. During this time, Meath would branch out to form the electropop sensation Sylvan Esso. Mountain Man reunited at the 2017 Eaux Claires Festival and decided to record Magic Ship within a few months.

The group’s sound relies on smooth, impeccable vocal harmonies and sparse instrumentation. Like their first album, Magic Ship carries a sense of ethereal wonder that borders on spiritual. The magic of Made the Harbor’s sound is preserved, but the almost decade-worth of maturation (both musically and in life experience) is evident in the new album.

Magic Ship is somehow both lively and laid back, a meditative reflection on the beauty of life. If nothing else, it’s a heartening testament to the enduring powers of fruitful friendships and true musical connection.