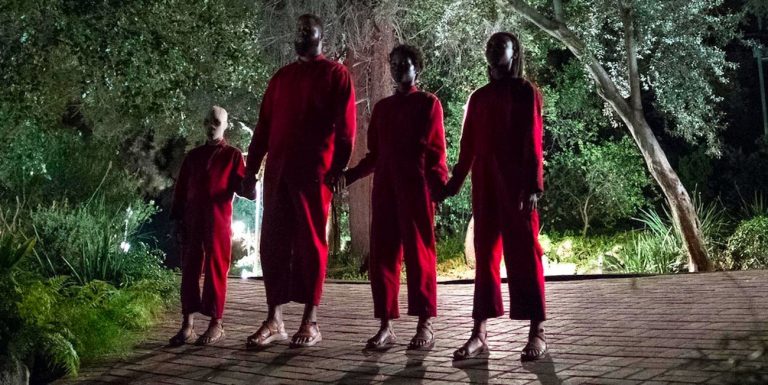 While comparisons to Get Out have tethered themselves to Us with the same intensity as the film’s nightmarish scissor-wielding doppelgangers, Jordan Peele’s sophomore effort as a writer-director proves that he is more than capable of outrunning the shadow of his previous work. The bold and enigmatic artistic statement that is Us feels like someone challenged Stephen King to adapt the concept of The Parent Trap, as the picturesque Wilson family’s Santa Cruz vacation quickly turns from a lighthearted romp to a nightmare when a family dressed in matching red outfits appears without speaking a word in their driveway. Their concern rapidly turns to bewilderment when the Wilsons figure out that their uninvited visitors are actually silent carbon copies of themselves. Soon, the family soon finds that their bizarro world counterparts are out for blood. However, what begins as a self-contained home invasion story quickly unravels into a crisis of much larger scale, as Peele takes the viewer on a nail-biting ride with more twists and turns than the winding Santa Cruz roads of the film’s backdrop.

The electric chemistry of the Wilson family is the engine that powers this thrill ride, spearheaded by parents Adelaide (Lupita Nyong’o) and Gabe (Winston Duke), who are reunited by Peele following their roles in the extensive ensemble cast of last year’s smash hit Black Panther. Nyong’o delivers an exceptional performance as both the restrained yet fiercely protective matriarch of the Wilson family, and the lone doppelgänger with the ability of speech, although what she emits is more a guttural snarl that registers like nails on a chalkboard than an actual human voice. Yet while Us is simply another salient performance for the always eminent Nyong’o, Duke’s silver screen career is shockingly short, as Black Panther was actually his feature film debut. In a complete 180 from his breakthrough as the imposing warrior-King M’Baku, Duke’s role as Gabe Wilson sees him channeling his inner Hal (played by Bryan Cranston) from Malcolm in the Middle, as he serves as a perfect foil to the timidity of Adelaide with his lovably goofy disposition and constant stream of dad jokes.

However, Duke is not the only relative newcomer who feels like a seasoned veteran in Us, as the Wilson children shine equally bright. Both teenage daughter Zora (Shahadi Wright Joseph) and elementary-aged Jason (Evan Alex) both make their feature film debuts in Us, yet you wouldn’t know this based on how impressive their range is. Jordan Peele’s writing style commands actors of any age with his tendency to blend genres, so to think there was not a single moment when either kid came off as inauthentic in the least is not only a testament to their own abilities but also Peele’s knack for squeezing the most he can out of his talent despite his own lack of substantial experience in the director’s chair.

While the majority of Us is centered around the dynamic of the Wilson family, superb ancillary performances are delivered by Elisabeth Moss of Mad Men and the Handmaid’s Tale fame and one of Peele’s former sketch comedy contemporaries in Tim Heidecker of the Tim & Eric duo, who play the haughty Wilson family friends Kitty and Josh Tyler respectively, managing to carve out some of the most memorable moments in Us despite only appearing in what couldn’t have been more than ten minutes of screen time.

Visually, Peele experiments far more in Us as he begins to really find his footing as a director. Being fair to Get Out, Peele’s directorial debut had a lion’s share of iconic imagery all its own, with the litany of memes that sprung from screenshots of the film being a testament to Peele’s ability to create memorable moments without dialogue, but in terms of consistency Us is a massive improvement. From the opening scene until the closing credits, Peele utilizes reflections and shadows symbolically in a far more nuanced manner than the sometimes overt visual language which I felt was one of Get Out’s lone weaker points.

While I love how nuanced Us is in general, I do feel that this somewhat stemmed from the glaring flaw that holds this film back from greatness, which is simply an overall lack of satisfying resolution. While the film certainly lends itself to endless speculation about its subtext and the way certain storylines end, I honestly left feeling somewhat empty due to the third act. Without giving too much away, it felt like Peele had laid a solid foundation of ideas for the first ⅔ of the film, but was unable to commit to a specific ending, leading to a result that is a somewhat vague and rushed conclusion which in my eyes lacked the punch that such a thrilling film deserved.

Yet, this is not to say Us is still not a very enjoyable film. Overall, I’m extremely happy to see Jordan Peele experimenting so much both technically and in terms of writing on what is only his second feature film. In fact I still can’t believe the standard I’m already holding Peele to in this review, as I think everything I didn’t enjoy about this film is simply a result of experimentation with storytelling which may have simply not resonated with me for a various reasons. In terms of every technical aspect this film is amazing, and although I may have had a few gripes with the writing towards the ending, overall I have to say Us is still easily the best film I’ve seen in 2019 thus far, and I truly believe the sky’s the limit for Jordan Peele as a filmmaker going forward.