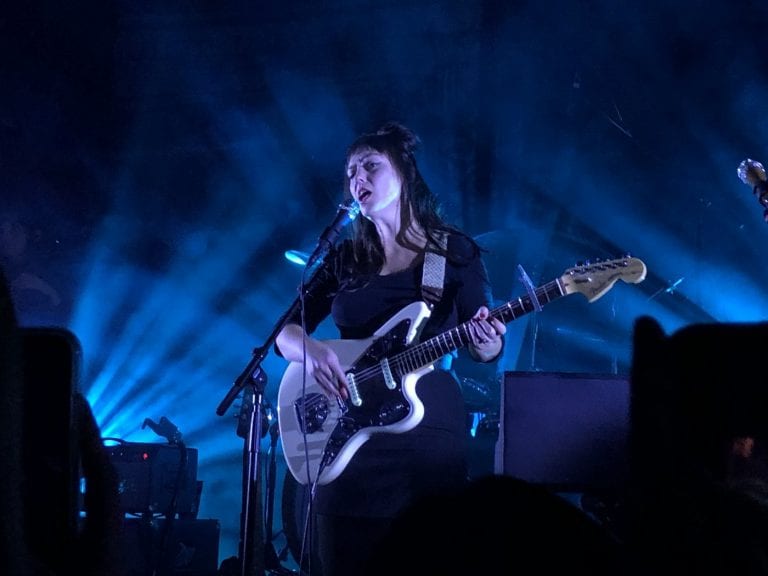 Last Sunday night (November 10th), Angel Olsen walked onto the stage of the Granada adorned in a sleek black dress, thick black winged eyeliner, and her signature bumped up hairdo. Like an ethereal being, she was quickly acquainted with large beams of light surrounding her, placing her in a shadow like an angelic figure lingering over her piano. Accompanying her on the stage was a large band equipt with a violin, cello, drums, bass, keyboardist, and guitar player. Behind her the backdrop of a large staircase; perfectly enhancing the elegance of her music.

The crowd instantly went nuts, and a few eager young girls in the front begin to scream. The active audience carried on throughout the night, with multiple interactions between Angel and her adoring fans. She hilariously commented back throughout the night and even played fun with some of her over-eager fans.

Olsen’s new album All Mirrors delivers a side of Olsen- elegant and angry. She provides her own view of romance, emotions, and life overall. Jokingly, before the start of her songs, she would comment about the emotions she felt before playing a song. This evoked a feeling within the crowd that helped put us in the head space of Olsen as she played her emotional set.

“Sometimes I just feel so angry,” she would say as she reared up to play a passionate song. The crowd absolutely loved it. Her new album features a very raw side of Olsen’s life, which really came through on stage. The strings were just the icing-on-top of her powerful vocal ability.

The band was highlighted throughout the show as everybody on stage had fun jamming, and experimenting together. This provided a unique experience with some lively experimentation between Olsen and her guitar player- at times even mixing in some psychedelic sounds.

As someone who had never seen Angel Olsen live before, I was extremely taken back by her intense vocal range that came across so easily to her. Her voice not only sounded just like her recorded albums- it felt more powerful, and passionate live. I highly suggest seeing her live to anybody who gets the chance. The power of her voice, her stage presence, the band, and the lighting perfectly came together to create an ethereal ambiance. The atmosphere radiating through the Granada was enough to transport you into the inner depths of your mind for an amazingly wicked experience and fun time overall.

Also, shoutout to her opener, Vagabon — another amazing female vocalist–for setting the mood perfectly for the rest of the show.